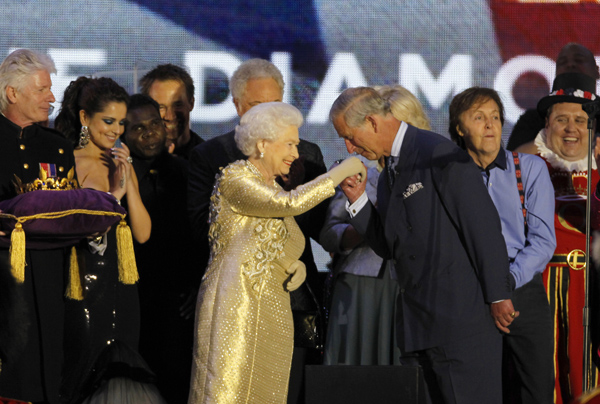 LONDON - Britain’s Queen Elizabeth II on Monday brought to a spectacular close a star-studded diamond jubilee concert that included a heartfelt tribute from the huge crowd to her ill husband Prince Philip.

The queen appeared on stage after Paul McCartney performed the final set to light a ceremonial beacon, triggering a thunderous fireworks display seen by hundreds of thousands of spectators.

Moments earlier, her son and heir Prince Charles took center stage to celebrate the “life and service of a very special person,” drawing cheers from the crowd as he paid tribute to his “mummy.”

Despite the informal good spirit of the occasion, the prince expressed regret over the absence of Prince Philip, who was earlier hospitalized with a bladder infection.

“The only sad thing about this evening is that my father cannot be here with us, because unfortunately he’s been taken unwell,” he said.

Charles urged the crowd to show their support, and they responded by raising a huge roar and chanting “Philip, Philip.”

Singer Robbie Williams kicked off the gala event on a giant stage in front of Buckingham Palace and was followed by acts from throughout the queen’s 60-year reign, including Elton John, Kylie Minogue and Stevie Wonder.

McCartney brought the music to a dizzying climax with a brief set of the Beatles and solo classics.

The crowd joined in as “Macca” ran through “Magical Mystery Tour,” “Let It Be,” a pyrotechnic-filled “Live and Let Die” and “Ob-La-Di, Ob-La-Da,” which had members of the royal box singing along.

The singer later said he was proud to be part of “a fantastic spectacle.”

“I don’t know why people think the British are so stuffy when the queen holds raging house parties like this,” he joked. “You feel quite honored to come on and do your bit. We love to do our bit.”

The 86-year-old monarch, wearing a black and gold cape, arrived 90 minutes into the three-hour concert and was instantly greeted by cheers from a sea of revelers waving red, white and blue Union Flags.

The queen smiled and waved to the crowd after reaching her seat but her appearance without the man who has been at her side for 60 years of duty brought a tinge of sadness to the moment. AFP