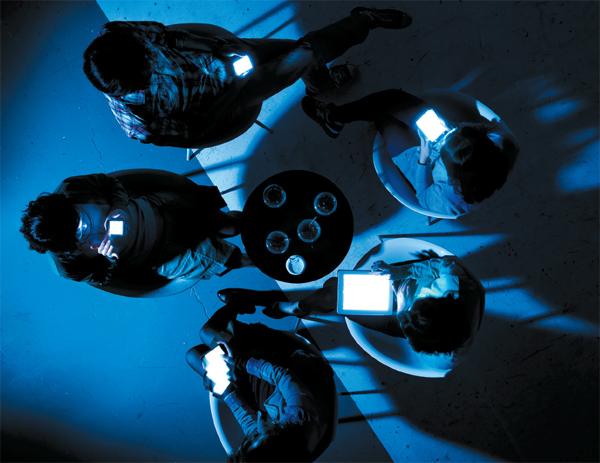 Addiction to smartphones is on the rise, especially among those with few human interactions.

Family gatherings and dates have gotten quieter as everyone has their eyes glued to smartphones, shunning “face time.”

A 49-year-old housewife surnamed Hyeon recently arranged a family gathering at her house in Bundang, Gyeonggi, to celebrate the birthday of her father-in-law. About 10 people gathered for the meal, but it was quieter than it ever had been before.

Hyeon’s two daughters - one a freshman in college and the other a freshman in high school - both had their eyes glued to their smartphones throughout the family dinner.

“It’s like I am with them but not really with them,” Hyeon said. “As long as they have their smartphones, family doesn’t seem to mean much to them. It’s sad.”

The situation is similar in university classrooms. But it’s not because all the students are focused on the lecturer. There is less person-to-person chatting than before, but there is just as much chatting on smartphones.

“If there are things I don’t get in lecture, I ask others in the classroom through Kakao Talk [a mobile messenger application] on the spot,” said Lim, a psychology major at Yonsei University.

Even couples - dating or married - appear to be opting to communicate via smartphones.

A 38-year-old worker surnamed Lee often spends one to two hours reading headlines, window shopping or tweeting on her smartphone before going to sleep at night.

So does her husband, who is lying right next to her.

Sometimes they even share interesting things they have come across - a YouTube video clip, for instance - sending it on Kakao Talk with a message, “Isn’t this hilarious?”

Before the introduction of smartphones in Korea two years ago, most people paid for each text message they sent. But today, most subscribe to unlimited data access plans and use mobile messenger applications.

So with smartphones, talk may be cheap, but it comes at a price. Addiction to smartphones and social networking services (SNS) is on the rise in Korea, especially among those with few real world people skills.

“I spend my day uploading postings of little significance and replies that are just formalities. I don’t like how I am dominated by SNS and how my life revolves around it,” said a college student surnamed Lee at the Korea Internet Addiction Center. “But I just can’t help it. I get nervous when the battery starts to die on my smartphone.”

“Recently we are seeing more cases that are not just ordinary immersion, but rather serious addiction [on smartphones and SNS],” said Lee Na-mi, an expert in neuropsychiatry and psychology. “It is time the country works on raising social awareness and devising solutions.”

The Korea Internet Addiction Center operates within the National Information Society Agency, and as the center’s name suggests, its primary target is addictions to the Internet and online gaming, not to smartphones and SNS. However, because there is not yet an institution dedicated to smartphone and SNS addiction, it tries to fill the gap.

“I get about 40 phone calls or visits a day, and there’s been a notable increase in smartphone and SNS-related cases,” said Lee Seung-hee, a consultant at the center.

But the biggest challenge is that smartphone and SNS addiction is a new phenomenon.

With addiction to the Internet and online games, authorities or parents could get rid of the PC or limit access to the Internet or PC bang (game room). But with mobile devices like smartphones and tablet PCs, such restrictions are of limited use.

“Smartphone and SNS addiction is new, so there has yet to emerge a systematic, credible diagnosis and treatment,” said Park Yong-cheon, a professor at the mental health department of Hanyang University Guri Hospital.

But the National Information Society Agency did develop a questionnaire for people to find out if they are likely to become addicted to smartphones.

And Seo Bo-gyeong, a researcher at the center’s media addiction division who oversaw the questionnaire, pointed out that people with relatively few human interactions and weak social skills are more vulnerable to the addiction.

“Seventy-seven percent of smartphone addicts we’ve interviewed said they primarily use their devices for SNS,” Seo said. “And we believe one of the biggest causes of addiction to smartphones is the personal relationships formed on SNS.”

And this is what differentiates smartphone and SNS addiction from other addictions, such as the Internet and online games, in which people become captivated by a virtual reality.

SNS addicts seek pleasure from interaction with others, so in a way they are addicted to personal relationships - getting a kick out of responses to their postings and pictures. Such interaction can create an identity or ego that is distinct from reality.

That is why those with few face-to-face interactions tend to be more drawn to SNS, experts say, adding that they can lash out violently and impulsively with few tangible consequences.

“Exchanges on SNS are rather idealistic. People show what they want to show. And comments are also more compliments than criticisms,” Seo said. “So if someone rattles the ideal world that such people have created, that upsets them.”

The toxicity of smartphones and SNS is quite strong, too.

According to the National Information Society Agency, about 8.4 percent of smartphone users it surveyed were addicted to their devices compared to an Internet addiction rate of 7.7 percent.

In fact, social networking services such as Facebook and Twitter are more addictive and more difficult to resist than cigarettes or alcohol, according to recent research by a team from the University of Chicago Booth School of Business.

Experts say that for those who think they may be addicted to smartphones and SNS, it is important to increase face-to-face interactions.

“People who get hurt easily and are reliant on others tend to turn to SNS for socializing,” said Sim Yeong-seob, a cyber psychology professor at Daegu Cyber University. “But to keep from being addicted takes effort, such as meeting and conversing with people in person and having quality face time.”

Others advise deleting unnecessary applications, turning off automatic notification functions and limiting the time of use. Another strategy is to designate places where smartphones will not be used.

Meanwhile, among Korean scholars today, there is a debate going on over whether or not smartphones are isolating or connecting people.

“SNS is a tool for communication, but it is causing polarization and fragmentation in our society,” said Jo Hwa-soon, a political science professor at Yonsei University. “This is because one of the strengths of SNS is that people can use it for self-reinforcement.”

She said people use SNS to express their opinions and find others who are on the same page.

“It appears discussions are active on the surface, but there is a very weak link with conflicting arguments,” she said. “In these cases, SNS is more of a weapon for mobilizing [people who think the same] and not a tool for communication.”

But not all agree.

Jang Deok-jin, a sociology professor at Seoul National University, said that given the statistics that the single-person household is the most prevalent in Korea today, networking through SNS implies connectedness.

He argued that things change a lot when an isolated individual casts a vote or a group of people in a network casts votes.

“When the telephone first came out, there were similar debates,” Jang said. “Critics said people should talk in person and worried that human interactions would be severed. But just as that didn’t happen, people don’t have to worry about SNS.”