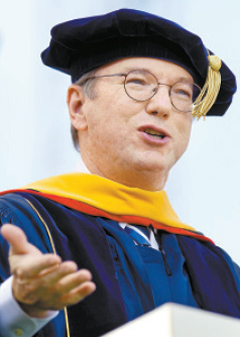 “Take one hour a day and turn that thing off,” Google executive Eric Schmidt said last month in his commencement address at Boston University.

That “thing” referred to devices like smartphones, tablets, laptops, desktops and e-book readers.

“Take your eyes off that screen and look into the eyes of the person you love. Have a conversation, a real conversation,” he said.

Also, a Jewish organization called Reboot has been celebrating “The National Day of Unplugging” on March 23. It advises people to stay away from phones, e-mail and social networking services for 24 hours. “Take time to notice the world around you. Connect with loved ones. Nurture your health. Get outside. Find silence. Avoid commerce. Give back. Eat together,” the pledge says.

Such a digital detox movement is also under way in Korea, albeit on a smaller scale. Last year, a civic group called Happy Society Network started a campaign in which it advises people to turn off smartphones for one hour a day.

“Students today have such a heavy reliance on smartphones that they seem like slaves to the devices. I wanted them to get a chance to live otherwise, even for a moment,” said Lee Yong-ho, a law professor at Yeungnam University, who took part in launching the group.

Healience, which is a healing camp in Hongcheon, Gangwon, has banned the use of mobile phones since its opening in 2007. “This is an area where people can purify their bodies and minds away from busy, modern life. So I want them to feel how liberating it is to be without mobile phones,” said Lee Si-hyeong, a psychiatrist who runs the facility.

Temple stay programs also ban smartphone usage. “Some people get antsy and ask for their smartphones, but after the three-day program, many say they feel a sense of freedom,” said an employee at the stay program for Geumsan Temple in Gugi-dong, central Seoul.