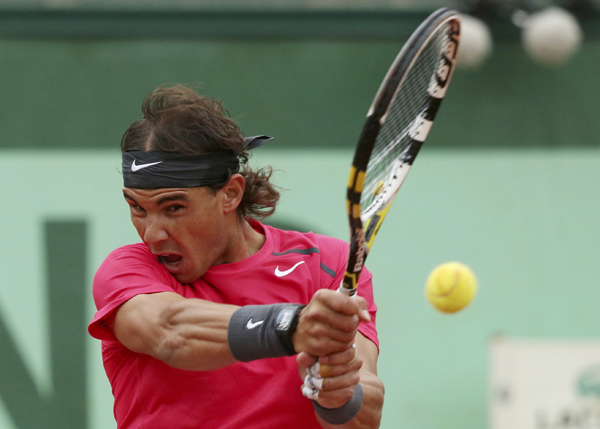 
PARIS - As is his wont, Rafael Nadal declined to assess whether the 2012 French Open is his best French Open yet.

Perhaps the question was too narrow.

Truth is, Nadal is putting together one of the most dominant runs ever at the clay-court Grand Slam tournament - or any major tournament, for that matter - so far, losing a total of 19 games through four matches, including Monday’s 6-2, 6-0, 6-0 victory over 13th-seeded Juan Monaco of Argentina.

That’s the fewest to this point at Roland Garros since 1982, when Guillermo Vilas dropped only 16. Like Nadal, John McEnroe also made it through four rounds while only losing 19 games at the 1984 U.S. Open.

“I feel really comfortable, really at ease,’’ said Nadal, who is tied with Bjorn Borg with a record six French Open championships. “When the tournament is over, I’ll tell you if this was my best Roland Garros or not. For the time being, I’m still playing. So far, so good. But we’ll see. Things could change.’’

He trailed 2-1 at the start against Monaco, one of Nadal’s best friends on tour, before reeling off the last 17 games in a row.

“I feel very, very sorry for him,’’ the No. 2-seeded Nadal said after improving to 49-1 in the French Open over his career.

The only loss came in the fourth round in 2009 against Sweden’s Robin Soderling.

Against Monaco, Nadal faced two break points and saved them both.

He made only 13 unforced errors, raising his total for the tournament to 64 - or 13 fewer than No. 1-seeded Novak Djokovic made in his fourth-round match alone.

“When you reach quarterfinals with my results, that’s always something positive, that’s true. .?.?. I have won quite easily. My results are good,’’ Nadal said. “But I’m not going to go through immediately [to] the semifinals.’’

Well, yes, that’s true. And consider this: When Vilas breezed through the early rounds 30 years ago, he wound up losing in the French Open final to Mats Wilander.

Nadal is scheduled to play an all-Spanish quarterfinal Wednesday against 12th-seeded Nicolas Almagro, who advanced by beating No. 8 Janko Tipsarevic 6-4, 6-4, 6-4 in the fourth round.