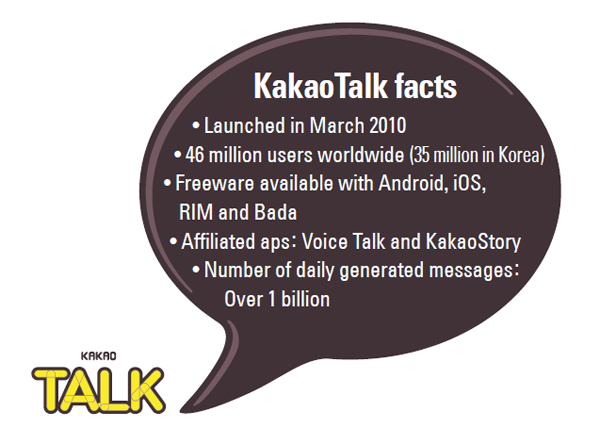 The service is called Voice Talk, and the top search phrase on the nation’s largest portal site Naver was “KakaoTalk free phone call.”

Web communities were flooded with questions and answers about how current Kakao users could upgrade their apps to get it.

Voice Talk works on both the Android and iOS operating systems, and it works through 3G phone service and over Wi-Fi.

They urged the Korea Communications Commission to restrict the service, and warned that its use could boomerang on subscribers by forcing the providers to raise phone bills.

Charges for phone calls are the main source of revenues for mobile phone service operators.

“The spread of mVoIP will harm industry progress, cause convenience to users and harm the national interest,” said SK Telecom in a release.

“It will drag down mobile service operators’ profitability, which will in the long run result in a deterioration of service quality from monthly charge hikes and reduced investment in infrastructure.”

The telecommunication arm of SK Group proposed that the government come up with countermeasures as soon as possible.

Free call services are not new. Skype has been around since the dawn of smartphones, and Daum Communication’s MyPeople application launched an mVoIP service in February 2011.

But KakaoTalk is much more of a threat. Its instant message service has 35 million domestic users, almost 70 percent of the Korean populace.

In fact, mobile service providers are already limiting mVoIP. KT, for example, allows only 3G subscribers paying 54,000 won ($46) or more in basic monthly fees to use mVoIP. It restricts the data usage for free calls to 750 megabytes per month. Given that one megabyte corresponds to one minute of a phone call on a 3G network, users could make more than 12 hours of free phone calls monthly. The more expensive monthly fees become, the more mVoIP hours allowed.

Both KT and SK Telecom have engineered their networks to prevent free Internet phone calls for subscribers paying less than the designated amount monthly and restrict the amount for others. LG U+, a third-tier player, bans mVoIP entirely.

The carriers say their billing systems will have to be revised because they didn’t anticipate the strong emergence of mVoIP.

The KCC is in an odd position, having to consider both consumers and the mobile carriers.

“We are discussing a variety of measures concerning Kakao’s free calls,” said an official with the KCC’s Competition Policy Department. “But we are not in a situation to instantly reach a conclusion and take action.”