[Interview] A peacemaker and man of the people

[Interview] A peacemaker and man of the people 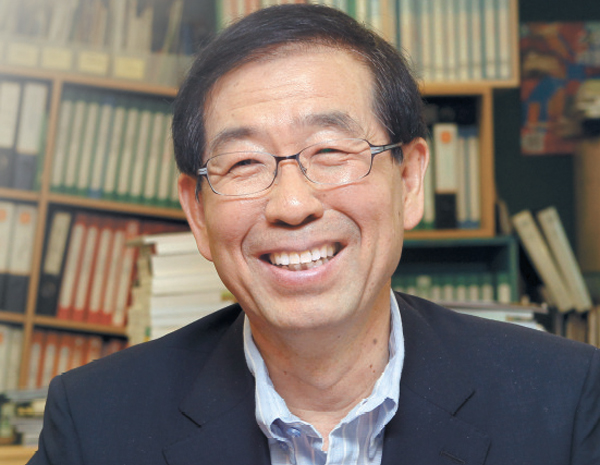 
Seoul Mayor Park Won-soon was hardly standard government official material. After passing the bar exam in 1980, he worked as a human rights lawyer and civic activist for more than two decades. Among his notable achievements, he founded Beautiful Foundation and The Hope Institute, thus marking a new era in the development of civic movements. He changed tack last year by running for the Oct. 26 by-election for Seoul Mayor and confounded skeptics by winning it. After seven months in office, Park told the JoongAng Sunday recently, “I don’t understand why people want to have this job. It’s really hard.” He then added that he feels a sense of accomplishment whenever he announces constructive policies.

Q. What is the main philosophy of the Seoul Metropolitan Government under your stewardship?

A. Everything revolves around the public. If a couple of policy makers were to just sit around a table randomly coming up with new policies, most of them would not be plausible, because they are not based on people’s real needs. But I think we’ve seen a positive change, in that sense. I now have about 500,000 followers on my Twitter account, and I can see how society works, what problems Seoul City has and who is in need of help just by sitting here.

What is the most difficult part of your job?

Controversial issues are always trying, because the main and opposition party hold different opinions on many issues, so I need to intervene and iron out conflicts. For example, new-town and redevelopment projects were initiated by former mayors, and now we have over 1,300 areas that have been designated as ‘new towns’ .?.?. I believe it will take at least 10 years to resolve problems related to this issue. [Unlike his predecessors, who championed the new-town projects, Park said earlier this year that almost half of them would need to be re-evaluated. Meanwhile, five protesters and a member of a police SWAT team died following a violent standoff on a construction site in Yongsan, central Seoul, in 2009. Protesters took over a five-story structure to show their opposition to plans to redevelop the local area by demanding higher compensation for their houses and stores.]

Seoul City has about 25 trillion won ($21.7 billion) of debts, but you’ve promised to lower this to 13 trillion won during your term. Is this really possible?

It’s certainly not going to be easy. I also pledged that I would increase the welfare budget by 30 percent and offer 80,000 rental houses. But this is like catching two rabbits that are running in opposite directions. So I decided to lead by example and cut my own costs by 20 percent. As such, the size of the mayor office’s is now smaller than before and I receive fewer official expenses from the city. A new, more fuel-efficient car has replaced my SUV. However, the lion’s share of the debt derives from SH Corp. The state-run construction firm’s debt is approaching 15 trillion won. If we sell many of its properties, the debt will drop - but this risks compromising the public interest. It’s a very complex issue that requires much time and consideration.

On Sunday, you stopped unionized workers from striking by issuing comments from your Twitter account. But Seoul City already shells out 1 trillion won [$8457 million] a year to support its public transportation system. Can it afford to raise wages anymore?

The last time we faced this problem, subway fares were increased to make ends meet. But the position of Seoul mayor is very political, so I have to find solutions that minimize the burden on citizens. I think there is still much room to raise the fare because it is still cheaper than that of other countries, but such a move requires the public’s consent.

What is your take on universal welfare programs, such as those offering free lunches and free daycare plans? Some people say Europe’s current financial crisis stems largely from its generous welfare programs. Do you agree?

Many OECD reports place Korea’s economy in the top 10, but this is not the case when talking about welfare systems, where Korea ranks as one of the worst.

If we could upgrade people’s quality of living it would move us up to the next level of economic growth. All these welfare programs might look like a waste of money, but they aren’t. For example, if we allocated an extra 800 billion won a year for education [for toddlers], there would be more state- and city -run daycare centers, and more women would be able to keep working. It would also create more job opportunities.

Speculation is rife that Ahn Cheol-soo, dean of Seoul National University’s Graduate School of Convergence Science and Technology, will run in December’s presidential election. As he strongly supported your campaign to become mayor, do you owe him a debt?

If he runs, I’ll definitely help him in any way that I can. But there are limits to what I can do, due to my position. If I do my best as Seoul mayor, and people agree that I’m doing my best, I think that would be most helpful for Ahn in itself.

Many people thought you would throw your hat in the ring for the last presidential election, but you focused on civic activism instead. Why?

It was what I wanted to do at that time, and I thought there were many others just as suited to politics as me. But I received numerous offers, and I suddenly thought that it would be a mistake to keep declining them, given the nature of the times.

Your tenure ends in June 2014. After it expires, how would you like to be remembered?

As a friend, or as someone who gave comfort to those he moved among.