Assembly fails to open as parties stand off

Assembly fails to open as parties stand off 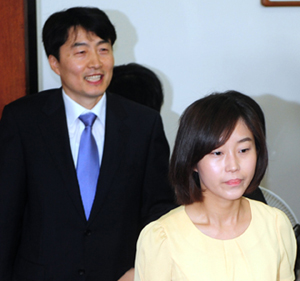 Lee Seok-gi, left, and Kim Jae-yeon, right, attend the meeting of lawmakers of the opposition Unified Progressive Party, yesterday, in the National Assembly in Yeouido, Seoul. Lee and Kim, proportional representatives of the UPP, are under pressure to step down for an alleged rigged primary in March. [NEWSIS]

The National Assembly failed to convene its first plenary session yesterday, as the ruling and opposition parties refused to compromise over control of key parliamentary committees.

Under the National Assembly rules, the unicameral legislature is required to finish electing a speaker and vice speaker within seven days of the start of a new term. The 19th National Assembly started its four-year term last Wednesday, and yesterday was the seventh day since.

The rule has been broken by every Assembly since the 13th, and political observers say it could take a significant length of time to start the new parliamentary session given the stubborn nature of the political standoff. The last parliament took 89 days to start its first session.

The main opposition Democratic United Party boycotted the opening of a plenary meeting and election of the speakers yesterday, saying it needs to reach an agreement with the ruling Saenuri Party on divvying up the chairmanships of parliamentary standing committees. The Saenuri argued that they should elect the speakers while negotiating control of the committees. 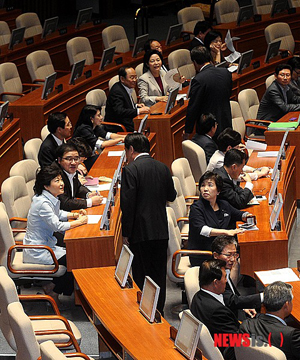 The two parties, however, are at odds over which committees they will get. Saenuri offered to give up the chairmanship of the committee on foreign affairs or defense. The DUP demanded a committee on culture, land or political affairs. Saenuri’s counter-offer was to give the DUP the land committee in return for the Legislative and Judiciary Committee. The DUP refused. To be put up for a full vote in the Assembly, a bill must pass through the judiciary committee.

The ruling party and opposition are also bickering over how to deal with several opposition lawmakers who have caused controversy with their pro-North Korean stances. Saenuri demands they be ousted from the parliament, which the DUP rejects.

The parties also disagree over solutions to other pending issues such as the illegal surveillance-abuse of power scandal involving government officials and prolonged strikes at major media outlets, which are protesting government control of them.