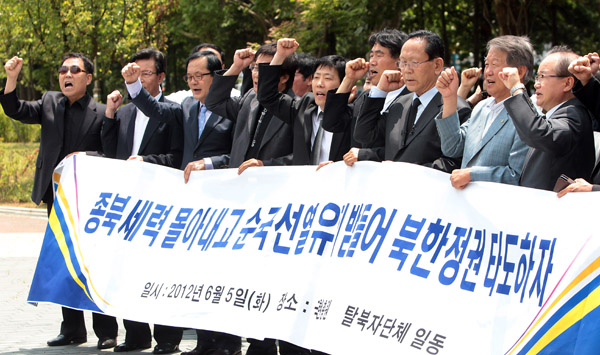 North Korean defectors hold a press conference yesterday after paying tribute at the Seoul National Cemetery. This is the first time that defectors have visited the national cemetery to commemorate Memorial Day. [YONHAP]

Lim Soo-kyung, a main opposition Democratic United Party lawmaker, prompted public uproar over her alcohol-fueled tirade against North Korean defectors. At a local restaurant in central Seoul, Lim told a young North Korean defector “how can a son of a bitch like you, a North Korean defector of humble birth, come and challenge a lawmaker of the South Korean parliament?” She then brought up the name of Ha Tae-keung, another student activist from the 1970s and 1980s who started condemning the dictatorship and human rights abuses in the North. She described Ha, who won a seat in the National Assembly in the April 11 general election, as a “son-of-a-bitch betrayer.” She added, “I will kill him with my hand.”

Lim made an apology by issuing a statement and bowing in public, and the DUP’s chairman Park Jie-won publicly said he won’t punish her because her apology was sincere.

Still, the anger of the defectors lingers alongside that of the ruling party, which has advocated for defectors’ groups and human rights in the North.

Hwang Woo-yea, chair of the ruling party, said in a radio speech yesterday, “There is a lawmaker that triggered public anger and uproar by calling North Korean defectors ‘traitors.’ We urge her party to punish the lawmaker in public.”

Ha also yesterday said the DUP should take at least one measure.

“The DUP need to take a measure, at least give a warning to her,” Ha said. “Unless they do that, it means the entire party agrees with her thoughts.”

Yoon Sang-hyun, a ruling party lawmaker who is taking steps to pass a bill on North Korean’s human rights issues, also said during a radio interview that: “However drunk she may have been at the time, I think it’s a case of in vino veritas. It seems she is speaking like a member of North Korea’s Supreme People’s Assembly. The DUP should think about how to react to a person who acted in a way that people would never accept.”

Defectors in the South also expressed their anger toward Lim. A total of 36 civic groups of North Korean defectors yesterday held a press conference at Seoul National Cemetery after paying tribute to fallen soldiers during the Korean War, before the June 6 Memorial Day. “Lim should voluntarily resign and return to her homeland, North Korea,” they said in a voice.

Choe Ju-hwal, a representative of one of the civic groups, said, “Those who are directly ordered by the North Korean regime are shaking the foundation of the Republic of Korea, such as involving the Cheonan’s sinking or Yeonpyeong Island’s shelling. We should build the right position on North Korean affairs to thoroughly smash the provocative acts of North Korea and kick out those pro-North people.”

It’s the first time that they visited the national cemetery to mark the holiday. Defectors told reporters that they chose this act in an effort to drive pro-North people from the South.