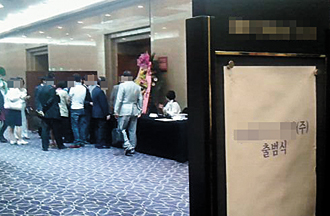 Some 300 people celebrated the opening of a marketing company in Yangjae-dong, Seocho District in southern Seoul, Monday. By Lee Jeong-bong

Some 300 people in formal clothing gathered at the Seoul Center of Education and Culture in Yangjae-dong, Seocho District in southern Seoul, Monday afternoon.

Most attendees were middle-aged, although mixed through the throng were fresh faces in their early twenties, all holding invitation cards for the event. Flower arrangements had been sent in celebration.

The occasion was the inauguration of a new door-to-door marketing company in Seocho.

Police began cracking down on pyramid-scheme marketing companies last year because they preyed on naive, young people from the countryside and made them into virtual slaves through a combination of brainwashing and self-help promises. They were told they would get rich - but only after making the people above them richer first. And even though leaders of some of the companies have been arrested and even jailed for fraud, the schemes keep bouncing back, as the celebration in Seocho shows.

Last Friday, two managers of a marketing company in Songpa District, southeastern Seoul, were arrested for allegedly enslaving some 1,500 people and reaping 6.3 billion won ($5.3 million) in revenue in a year and a half.

The supposedly new marketing company inaugurated on Monday was the product of an overnight merger between the Songpa-based company and a pre-existing Seocho-based company.

After the two managers were arrested Friday, the two remaining managers, a 40-year-old man surnamed Lee and a 33-year-old woman surnamed Jeong, merged with the other company and moved their 900 workers to Seocho.

“In order to gain a marketing stronghold, it seems like they joined hands with an already existing Gangnam area-based company,” said a police source.

The pyramid schemes are disguised as legitimate businesses and they target young people, mostly college students or graduates from the countryside. New members are forced to buy thousands of dollars worth of useless items - usually after borrowing money from banks - and are told to sell them. The existing members then share the profits.

The workers are housed in prison-like conditions and brainwashed to believe they will someday be rich if they persevere through the hardships. Eventually, they are told to lure friends into the companies, who become the lowest-level slaves.

Police began a crackdown last July on eight companies based mainly in Geoyeo-dong and Macheon-dong in Songpa District. At one point, more than 100 companies operating such businesses seemed to have disappeared. But then they resurfaced in more central areas in southern Seoul.

A 37-year-old salesman and three others from another marketing company also in Songpa were arrested last September. The remaining leaders of the company simply took their 1,000 workers, mostly college students, and moved to the Gangnam area.