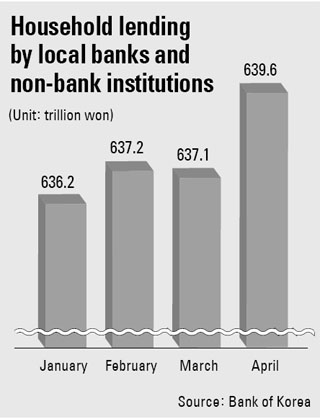 Household lending by local banks and non-bank institutions totaled 639.58 trillion won ($541.09 billion) as of the end of April, up 2.46 trillion won from the preceding month, according to the Bank of Korea (BOK).

The monthly total is the second highest after the 639.60 trillion won tallied in December 2011. The gains also come after loans dipped by around 100 billion won in March from the previous month.

The central bank said the increase was fueled by a rise in loans extended by both banks and non-bank institutions, and money loaned to farmers for spring planting.

The increase comes as Seoul attempts to control the rise in household credit out of concern that heavy indebtedness in the private sector will squeeze consumer spending and slow economic recovery.

The BOK froze the key interest rate at 3.25 percent for the 11th straight month in May due to uncertainties in the external economy. Yonhap