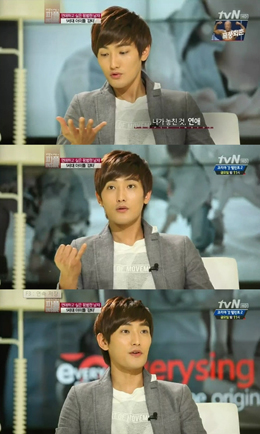 Singer Kangta confessed that the last time he was in a relationship was back in 2007, just before he went to fulfill his mandatory military service.
On tvN’s “Baek Ji-yeon’s People Inside” that aired on May 4, the ’90s idol group singer said that since he turned 30, he has not had a girlfriend.

“I don’t want to end up like Shin Seung-hun,” joked Kangta, referring to his friend and singer who is 44-years old and still single.
In all, Kangta said that he’s had about four relationships since he made his debut with the boy band H.O.T back in 1996.
“My first relationship was probably the longest. We broke up, made up and repeated that for about five years,” confessed the singer.

When the hostess asked who would be his ideal girl, the 32-year old bachelor said that he’d like someone “Who looks like Yoona but has Sooyoung’s personality,” referring to members of Girls’ Generation.

After the show, netizens were quick to take a snipe at his remark: “No wonder he’s still single.”