Liquid crystal displays, steel and ships not only kept the nation’s economy afloat in the wake of the 2008 global credit crunch but also rode the wave of Korea’s rapid recovery in late 2009 and 2010.

However, these industries that once helped boost Korea’s export earnings are now facing choppy seas as global demand has shrunk significantly due to the perfect storm of the euro zone fiscal crisis, China’s soft landing and the continued slowdown in the U.S.

The U.S. economy grew less than 2 percent in the first quarter and China saw growth slow to 8.1 percent, its worst rate in nearly three years.

This negative outlook is clouding the future prospects of the domestic LCD, steel and shipbuilding industries, although semiconductors are seeing signs of improvement after a protracted slump in demand and prices.

Down in the dumps


Market research firm DisplaySearch lamented in a February report that the LCD industry is “in the midst of its longest downturn since it was established.”

“The TFT LCD industry has experienced unprecedented change as a long-standing supply glut was accompanied by falling panel prices,” said David Hsieh, a senior analyst at DisplaySearch. “Panel makers are restructuring and adding new technologies and processes to reduce costs and enhance performance.”

Market observers said it is normal for the LCD industry to fluctuate every one or two years due to changes in supply and demand, with supply gluts causing deficits then being followed by periods of profitability as demand jumps.

But this formula collapsed for the first time in 2010, and the situation was exacerbated by last year’s emergent euro zone crisis. Even LCD ranking as a core material in TVs, PCs, tablet PCs and smartphones could not stop its slide.

LCD panels for 40- and 42-inch TVs dropped to $206 in January, the lowest price to date and a 40 percent reduction from 2010. This led LCD makers to post deficits for consecutive quarters, with No. 1 player Samsung Electronics spending a straight year in the red before finally posting a surplus in Q1 of this year.

No. 2 player LG Display is in even worse straits as it has suffered from six consecutive quarterly losses. Meanwhile, three other LCD makers - Taiwan’s AUO, Japan’s CMI and Sharp - are experiencing bigger and longer-lasting deficits.

To tackle tough times, LCD manufacturers are lowering the operation rate of their production lines and delaying investments. Samsung Display and LG Display have their operation rates at between 85 and 95 percent at their major plants, but some Japanese and Taiwanese rivals have reportedly dropped off to between 40 and 60 percent, market observers said.

AUO suspended its plan to build a new plant in China last June, while in December, Sony sold its stake in S-LCD, a joint venture it established with Samsung in 2004, to Samsung for $940 million as it struggled to cut its losses. Sharp sold its LCD business to Taiwan’s Hon Hai this March.

Industry observers say the LCD industry is narrowing from a three-horse race to one limited to two players - Korea and China - with the former moving to differentiate itself with unique technologies.

Korean companies rolled out mass-production models of next-generation OLED TVs in May for the first time in the world. They are now working on pliable OLED displays that can bend around surfaces.

DisplaySearch predicted that excess supply will fall below 10 percent in 2013 for the first time since the second quarter of 2010.

On May 30, construction of Hyundai Steel’s No. 3 blast furnace was in full swing, with the shell almost complete. When finished in September, it will have a production capacity of four million tons of steel a year either in the form of hot-rolled plates for ships or thick steel plates, the company said. 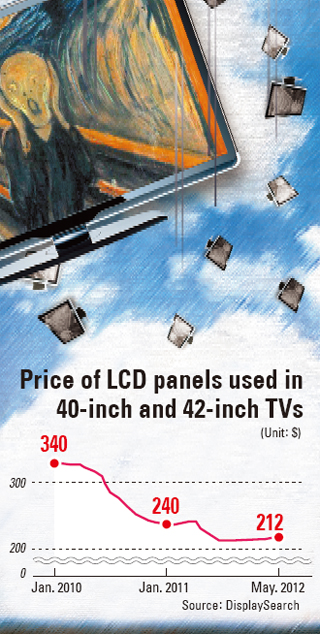 Hyundai began building the facility in Dangjin, South Chungcheong, in April of last year based on an investment of 3.2 trillion won ($ 2.7 billion). It green-lighted the investment back in 2006 when expectations for the industry were still rosy.

However, the company has now spent a total of 9.5 trillion won on the three blast furnaces, and some wonder whether it will ever recoup its investment. Supporting such fears, a nearby plant looks like a graveyard for stockpiled steel plates that the company has not yet been able to sell.

“It won’t be easy to get rid of these thick steel plates as the shipbuilding industry is now mired in an economic crisis,” said a Hyundai Steel official.

The credit crunch that erupted four years ago hammered the world’s shipbuilding and maritime transportation industries, leading to a drastic cut in orders for new ships and demand for steel plates.

Northeast Asia was hit particularly hard as China, a long economic driver in the region, began to lose steam in terms of demand. At the same time, the country has been gradually ramping up its production of crude steel by 10 percent a year.

Chinese manufacturers churned out 700 million tons of crude steel last year to own 40 percent of global production, but demand from the country has sunk at the same time and cheap Chinese steel has been flooding the Korean market - dealing local firms a double blow.

“Although demand for steel products may gradually improve, with the global economy showing signs of recovery, it will not happen overnight because there is still a lot of risk,” said Kim Min-soo, an analyst at Good Morning Shinhan Securities.

Long-ailing STX Group, Korea’s fourth-largest shipbuilder, is also recovering from the financial crisis. It has decided to streamline its business portfolio as the industry recovers by selling a key overseas subsidiary as well as its stakes in major projects to add to its liquidity.

Will chips bounce back?

Semiconductors serve as crucial components for high-tech gadgets and devices and they may be on the road to recovery after having been rocked by the recession.

According to IHS iSuppli, total semiconductor inventory as a percentage of suppliers’ revenue grew to 50 percent in the first quarter, up from 47.8 percent in the last three months of last year.

“In the fourth quarter [of 2011], inventory rose among suppliers because of uncertain macroeconomic conditions, such as the sovereign debt crisis in Europe, leading to an overall decline in global demand for semiconductors,” said Sharon Stiefel, an analyst at IHS.

“And while inventory rose during the fourth quarter for semiconductor suppliers, chip stockpiles fell at the same time among customers, indicating a paucity of demand,” she said.

“In contrast, the higher inventory numbers among semiconductor suppliers for the first quarter of 2012 represent a signal of better things to come. There was an increasing level of inventory both among chip suppliers and customers, indicating that both the supply and demand sides of the business believe that the environment in the electronics market has turned positive.”

Samsung’s chip business posted an operating profit of 760 billion won in the first quarter, but its revenue retreated to 7.98 trillion won on-year, marking a 13 percent decrease from the same period last year.

World No. 2 player SK Hynix swung to a net loss in the first quarter due to the industrywide slump. The company said in a regulatory filing that its net loss amounted to 271.2 billion won, compared to a profit of 273.5 billion won one year earlier.