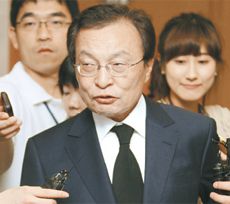 Lee Hae-chan, who is running for chairman of the Democratic United Party, yesterday dismissed a ruling Saenuri Party-initiated bill on North Korean human rights as a trick to send more anti-Pyongyang propaganda leaflets across the border, as he tried to defend his recent controversial remarks that the South shouldn’t interfere with human rights in the North.

The maverick former prime minister, who says that criticism of him and other opposition figures amounts to a “new McCarthyism” in Korea, has been sharpening his rhetoric against the conservative party and major media outlets. Whether this will help him, even within his own party, is doubtful, political observers say.

The so-called North Korea human rights bill, submitted recently by 11 Saenuri lawmakers, is “not to improve North Korea’s human rights and inter-Korean relations, but has been pushed ahead to support the dissemination of anti-North leaflets by ultraconservative groups,” Lee said at a press conference yesterday.

The bill “will only bring about the aggravation of inter-Korean relations” and “cause anti-North sentiment and tension and conflicts on the Korean Peninsula,” he said.

Lee, who served as prime minister in the Roh Moo-hyun administration, said on a radio program Monday that the North’s human rights issue is its domestic affair and the South shouldn’t interfere. The remarks stirred up a storm coming after his fellow DUP lawmaker Lim Soo-kyung, a well-known former student activist who met North Korean founder Kim Il Sung in Pyongyang in the 1980s, called a 28-year-old North Korean defector a “traitor” in a shouting match in a restaurant.

In a telephone interview on the radio the next day, Lee said his remarks were based on his party’s basic stance on the Saenuri Party’s North Korea human rights bill, but abruptly hung up the phone when the interviewer started asking about Lim.

The Saenuri Party is taking issue with pro-Pyongyang sympathizers as representatives, and Chairman Hwang Woo-yea said it is necessary for the National Assembly to introduce a review process for lawmakers to root out ideologically problematic figures. Hwang said on Tuesday that Lim as well as Lee could be subject to the review process.

Hwang’s idea, however, has yet to receive party-wide support. Many other leading figures in the party caution against going after people because of their ideologies.

“It is reckless to say that they will review my qualifications as a lawmaker or my viewpoint about a country, me who served six times as prime minister or minister,” Lee said at yesterday’s press conference. He called it an extremely malicious form of McCarthyism and said that it would be an unforgivable crime for the ruling party to go through with it.

Yoon Sang-hyun, a Saenuri lawmaker at the forefront of the party’s move to enact the North Korea human rights law, said Lee’s remark only demonstrates his lack of understanding of the bill.

“If the bill passes, it could help activate support by human rights groups for North Korea, but it is only confined to activities designed for improving human rights or supporting their humanitarian activities,” he said. “We can stop the support if some groups cross the line and worsen South-North relations.

Others within the DUP, however, are looking at the situation with concern. The DUP needs to avoid putting ideology ahead of policies or risk becoming very unpopular with the public, they say.