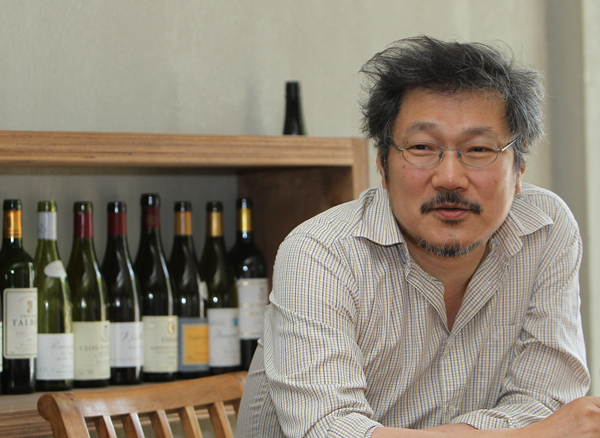 
When interviewing Hong Sang-soo, there are a few taboo queries the director refuses to answer directly. Any question regarding his intention regarding one of his films or whether he wanted to send a particular message through his work is always answered with an aloof ambivalence.

Last month, Hong attended the Cannes Film Festival for the eighth time with his film “In Another Country,” starring French art-house queen Isabelle Huppert. The film was invited to compete for the prestigious Palme d’Or prize, which this year went to Austrian director Michael Haneke’s film “Love.”

Addressing Korean journalists at Cannes before the announcement of the winner of the coveted top prize, Hong waved off questions about the European film community’s adoration of his work and about his intentions for Huppert’s character.

“The complexity of life can’t be summarized with a few sentences,” said the 51-year-old director.

“The various specifics of life, in that it can’t be reduced to words, is what I try to convey very organically in my works,” said Hong.

“When I find myself expressing in that way, I feel like a healthier me, as if my unhappiness and anxieties go away.” 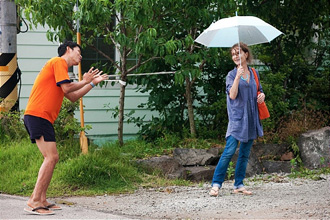 A scene with Yoo Jun-sang, left, and Isabelle Huppert from director Hong Sang-soo’s latest film, “In Another Country” [JoongAng Ilbo]

As a result, many of his films are based on intuition, chance and unconscious behavior, including “In Another Country,” his 13th feature film. Huppert plays three roles in the film - a renowned filmmaker, a married woman who falls in love with a Korean director and a divorcee who loses her husband to a Korean woman. All three women are named Anne and they all keep searching for a lighthouse in the small Korean seaside town of Mohang.

“I wanted to make a movie with the background of Mohang, in Buan, North Jeolla, and coincidentally, Isabelle [Huppert] contacted me saying that she wanted to appear in the film, regardless of which role,” said Hong, during a one-on-one interview with the JoongAng Ilbo last month, before his trip to Cannes.

“[Huppert] must have felt quite uncomfortable in this setting, but she said that it was a fun experience.”

Many of Hong’s male characters are cowardly pseudo-intellectuals, mainly washed-up film directors trying to sweet talk women into bed, including the leads in “The Day He Arrives” (2011), “Woman on the Beach” (2006) and “Like You Know It All” (2009).

When asked why so many of his male leads are this way, the director answered, “I don’t calculate important decisions in my work and the same goes for the types of characters I make. Those characters just come to me naturally.

“Life is complicated and contradictory. I try to portray those elements in my products [film].”

Among actors, Hong is well known as an impromptu auteur who gives them scripts on the day of the shooting.

“I don’t even know what I am going to shoot the next day. I try to balance things out while I’m shooting. The scene when Anne looses her umbrella [in ‘”In Another Country”] came to be because there was suddenly a lot of rain during the shooting.”

The international film community’s reception of Hong’s works has been mixed.

The European press, especially the French, tend to be favorable. For example, when Hong’s 2004 film “Woman Is the Future of Man” was entered in the competition category at Cannes, the French press raved about the work.

Le Film Francais, which collected reviews at the time, said “Old Boy,” Korean director Park Chan-wook’s film that won the grand prize at Cannes that year, stood “at the very lowest rank of all the competitors,” while Hong’s film was among the most welcom entries.

Meanwhile, the American press was less impressed, with The Hollywood Reporter saying the film was amateurish and “a dud compositionally.”

“I try not to get caught up in a simple, linear effort, so I use a lot of instinct and chance encounters. So that’s why people see my films in different ways,” Hong said.

When asked about his feelings toward the French film community’s affection for his works, Hong replied, “I don’t know what it is about French culture that agrees with my films. I don’t care necessarily to find out why and I don’t want to generalize.”

The director said he is finishing up another film, due to come out next month, with a scene featuring Jane Birkin.

On his days off, Hong said, he enjoys watching John Ford films.

“I think old John Ford films are pretty. I think there is always a young child in me, wanting endless [spiritual] nourishment. I think it will be like that for me until I die.”