KCCI takes up cause of irregular staff, utilizing FTAs

KCCI takes up cause of irregular staff, utilizing FTAs 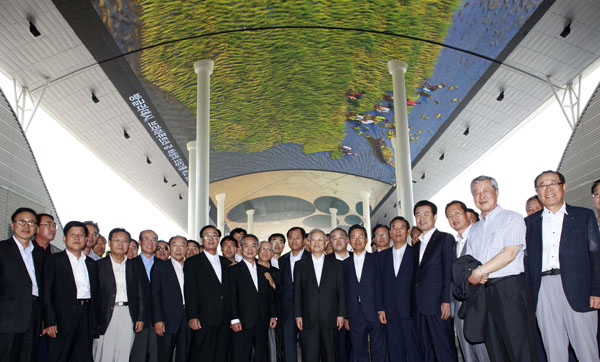 Sohn Kyung-shik, chairman of the Korea Chamber of Commerce and Industry, front row sixth from right, and heads of 70 regional chambers pose for a photo after touring the Yeosu Expo in South Jeolla yesterday. Provided by KCCI


Heads of the nation’s most influential business lobby group urged the government to relax tightened regulations on irregular workers yesterday.

They also called for extra measures to fully utilize the Korea-EU and Korea-U.S. free trade agreements to tackle the economic downturn. The first deal took effect last July and the second was implemented in March.

In a joint statement issued yesterday in the expo host city of Yeosu, South Jeolla, the Korea Chamber of Commerce and Industry (KCCI), a lobby group that represents 140,000 businesses, pledged to revitalize the economy, come up with measures to fully utilize the two trade deals, solve manpower shortages in SMEs and follow the government’s electricity-saving campaign.

“Tightened regulations on irregular workers could discourage companies from hiring more workers,” said Sohn Kyung-shik, chairman of the KCCI. “The government should [also] lower its acquisition tax and ease regulations for housing loans.”

Sohn, who also ranks as chairman of CJ Group, said the economy is in dire straits after having been slammed by a slowdown in exports and sluggish domestic consumption. Politicians and businessmen must work together for sustainable growth, he added.

To create more jobs, he said the government should give companies more autonomy in terms of hiring part-time workers.

The lobby group also advocated scrapping a plan to raise corporate taxes that is now being promoted by the National Assembly.

In a KCCI survey of 71 chairmen, 90.1 percent said the economy is badly in need to repair and 53.7 percent blamed the euro zone for causing a slump in demand. The organization said the government’s inconsistent business policies are merely adding to uncertainty in the corporate sector.