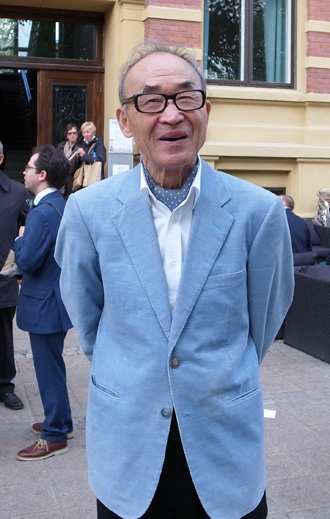 Poet Ko Un at the Kulturhuset Banken in Lillehammer, Norway.

LILLEHAMMER, Norway - Norway is an inspiring country because its people know how to “live while protecting nature as it is and serving nature,” Korean poet Ko Un said during his stay in Lillehammer for the Norwegian Festival of Literature that ran from May 29 to Sunday.

In spired by his impressions, he wrote a poem about the Nordic country and read it aloud when he met Foreign Minister Jonas Gahr Støre on May 31. It reads as follows:

It was not Ko’s first time in Norway. He received the Bjornsonordenen, or “The Bjornson Order,” in the Norwegian city of Molde.

He spoke with the Korea JoongAng Daily after talking with Støre.

Q. The festival’s theme this year is money. Have you ever written a poem about that?

A. No. But now I think I should write about it sometime.

Well, I once wrote a poem about the circulation of a bill from my real experience. I received a 1,000 won bill in change that I had written a secret code on long before. Still, I have not written about the qualities and nature of money.

Money is the extreme case of materialistic things. But, at the same time, the bills carry some spirit - they carry the faces of poets and other writers just as the 500 krone bill of Norway has the face of Sigrid Undset on it. How funny it is.

As a poet who has never been aloof about social reality, you must be interested in Norway’s social welfare system, too.

Of course, I am. And I think that social welfare has now become indispensable to the policies of politicians also in Korea.

You know, even Korea’s economically conservative party is talking about social welfare as an important policy nowadays.

The welfare in Korea is progressing, not regressing, I think. But you know, social welfare is considered in a broad sense. Korea’s very cheap public transportation fares [compared to Norway and other advanced countries] are a kind of social welfare. But it can be damaged by price hikes following privatization.

How do Norwegians understand Son [Zen] poetry, which is difficult even for Koreans with a Son-related cultural background?

They might understand it better as they are in a tabula rasa about that and have no prejudice. And they say that when I read my poetry to them, it is as if I am explaining the meaning to them.

The poetry is not theoretically understood but received by intuition.

I talked about Olav H. Hauge (1908?1994) during the conversation with the foreign minister. I participated in the translation of his book of poetry into Korean. It was published in 2008.

He wrote about Norwegian nature and people in simple and country-style words that penetrate hearts of men and women of all ages without abstruse decorations.

In fact, he was no country villager. He traveled all around the world.
By Moon So-young [symoon@joongang.co.kr]