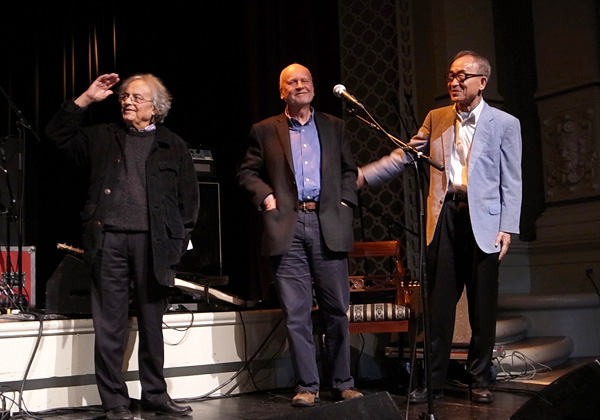 Three internationally renowned poets - from left, Adonis, of Syria, Adam Zagajewski, of Poland, and Ko Un, of Korea - pose after the “Poetic Evening Party” reading event Friday evening during the Norwegian Festival of Literature in Lillehammer, Norway. By Moon So-young

Korean poet Ko Un read “The Flower,” one of his most popular poems, in original Korean language at the Banqueting Hall of Kulturhuset Banken (Culture Bank) in the Norwegian city of Lillehammer on Friday evening. Then, Norwegian actor Øystein Røger read the poem’s Norwegian translation in intonation and tone similar to that of Ko. Perhaps because the poem is so short, the audience, after the reading, stayed in a silence that seemed to carry a question mark. But soon, exclamations of “Aha!” came from here and there. Loud applause followed from the 250 people who crowded the hall.

Ko, a 79-year-old literary lion, was attending the “Poetic Evening Party,” which was part of the Norwegian Festival of Literature in Lillehammer from May 29 to Sunday. Ko continued giving readings of his famous poems, juxtaposed with readings of the Norwegian translations, for about 20 minutes. Then, Polish poet Adam Zagajewski, 67, and Adonis, 82, of Syria, read their work for about 20 minutes each. The three poets have been considered in the international literary world as strong candidates for Nobel Prize in Literature in the recent years.

The small city of Lillehammer, with 26,000 residents and beautiful landscapes of mountains and a river, is a well-known venue for winter sporting events, including the 1994 Winter Olympics. It is less known as a town of letters. Every year since 1996, it has been the site of the Norwegian Festival of Literature, the biggest literary event in Scandinavia. The festival is held in memory of Sigrid Undset (1882-1949), the Norwegian novelist and 1928 Nobel laureate who spent many years of her life here and died in the city.

In this year’s festival, 31 internationally known Norwegian and foreign writers were invited to meet with enthusiasts during more than 50 programs, including reading parties, lectures, conversations and concerts. One of the highlights was the “Poetic Evening Party,” which brought together three of poetry’s of international stars.

Language barriers were not a big problem. When Ko, reading another of his poems, “Mosquito,” said “scratching scratching” with a humorous tone and gesture, the audience burst into laughter even before the Norwegian translation was read. When the poet read “The military demarcation line [between the two Koreas]” in grief-stricken tones, the audience was overtaken by a solemn mood.

After the reading party finished, several Norwegians came to Ko and asked for his autograph on his books. Among them was Kirsti Kluge, 59, who is a teacher. “Ko’s musical intonations and gestures, including the ways he moves his hands, are very impressive,” she said. 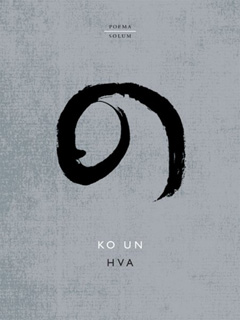 Kluge was carrying a book of Ko’s Son poetry, or Zen poetry, dubbed “Hva,” or “What,” which was published in Norway in 2007. Pointing to the poems in the book, she added, “The brevity of the poems is charming and they are liberating the way of thinking .?.?. And as I’m the generation of the ’68 movement, I know and am interested in Buddhism and Zen philosophy.” The ’68 movement or ’68 revolution refers to the student protests for social reform that started in France and spread to other parts of Europe and the United States, where they were linked to demonstrations against the Vietnam War and the counterculture hippie movement. At that time, new light was shed on the East’s Buddhist and Taoist philosophies in the West.

The festival brochure said Ko was a monk in a Son Buddhist cloister from 1952 to 1962 and “has lived a very eventful life.” It points out that he was “imprisoned as a political dissident on several occasions during the 1970s and 1980s when Korea was still a dictatorship.”

Norwegian readers and media expressed great interest in the poet. Ko had interviews with two to four media outlets a day during his stay in Lillehammer, including the country’s biggest media and state-run broadcasting company NRK.

“Ko could be one reason for the media’s heated interest in this year’s festival,” said Marit Borkenhagen, director of the festival. 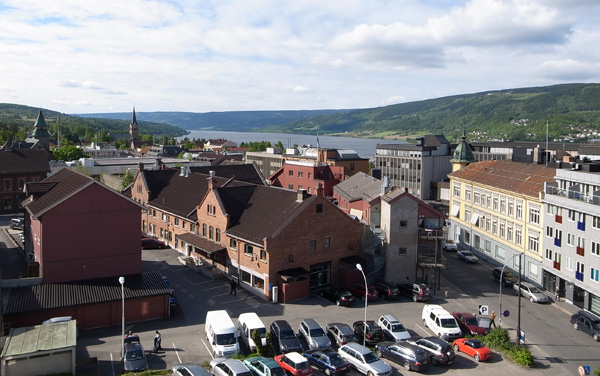 With a population of about 26,000, Lillehammer is better known as a center for winter sports than literary pursuits. But the Norwegian city that hosted the 1994 Winter Olympics also is the site of the annual Norwegian Festival of Literature. By Moon So-young


Regarding high level of interest, Ko said in an interview with the Korea JoongAng Daily, “There will be two reasons for that. Norwegians are very curious about East Asians living far from them. And when listening to my poems, they come to feel the resonance of sympathy about human emotions encompassing joy, anger, sorrow and pleasure that are universal across countries.”

“I feel poetry spring to its feet in their hearts through me,” he added, smiling. “And it is okay even if the eyes of the poetry are closed and they fall asleep. I can awake them again later.”

On the previous day, Ko also had a conversation with Norway’s Foreign Minister Jonas Gahr Støre about money, the theme of this year’s festival, and other issues including the two Koreas, politics and human rights.

During the conversation, Ko said, “Money is only the means of helping human eat, but now people try to eat money.”

Despite the interest in the Korean poet during the festival, Korean literature is still generally unfamiliar in Norway. Only one of Ko’s books of poetry - the “Hva” - has been translated into Norwegian.

“The translation of ‘Maninbo [Ten Thousand Lives]’ into Norwegian could be finished as early as this winter. But I have no intention to hurry. I will do that as slowly as going on a journey on the back of a donkey,” Ko said.

About 60 of his books have been translated into 16 languages, including four books in Swedish.

“Still, Korean literature is less known to Norwegians than Chinese and Japanese literature,” said Kristin Helle-Valle, head of the Literature House of Bergen, which is under construction and will open early next year. Bergen is the second biggest city of Norway.

“But Korean works of literature can strongly appeal to Norwegians, as they reflect uniqueness and cultural pride of Korea,” she said. “And the country has many things in common with Norway, such as mountainous geography and the struggle to maintain political and cultural independence.”

With the Literature House of Bergen, Helle-Valle plans to have a week devoted to Korea.