Spanish set out to reach historic treble in Euro

Spanish set out to reach historic treble in Euro 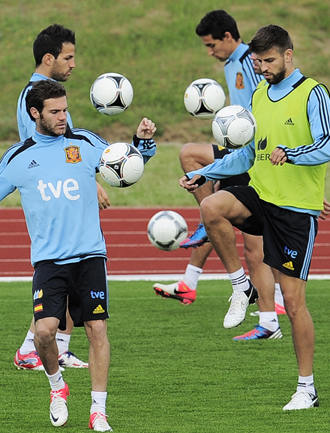 WARSAW - Poland gets the honor of opening Euro 2012 on Saturday morning KST against surprise 2004 winners Greece but it would take a major upset to see either team or co-hosts Ukraine progress as far as the July 1 final in Kiev.

Instead, few people would disagree with Michel Platini, UEFA president, who has predicted a repeat of the 2008 Spain-Germany final, as a major football championships goes behind the former Iron Curtain for the first time.

Holders and world champions Spain arrive aiming for an unprecedented three titles in a row for a European country, while Germany are intent on avenging their defeat in 2008 and two years later in the World Cup semifinal.

But some believe that La Roja’s fluid passing game that has worn down opponents in the past is vulnerable.

Young central defender Javi Martinez, though, believes they can make up for the absences of Puyol and Villa.

“Those who have been selected can do as well as they did, why not better? With the help of everybody, I think that their absence will not be noticed,” he said.

Germany’s players, for their part, have looked like the natural heirs to the Spanish crown after a young and vibrant Mannschaft impressed at the 2010 World Cup and qualified for Euro 2012 with a perfect record.

Friendly defeats at home to France in February and in May to Switzerland, though, have raised last-minute doubts.

Questions have also been asked about whether the team’s Bayern Munich stars have the mental strength to pick themselves up not only from their Bundesliga and German cup final defeats to Borussia Dortmund and Champions League loss to Chelsea.

Germany team manager Oliver Bierhoff - scorer of the golden goal that brought the country its last European crown in 1996 - has been trying to downplay expectations.

“Pride comes before the fall is our favorite saying these days,” said the 44-year-old. “The confidence levels are high, but there is still a high rate of insecurity as to what the team can and can’t do.

“In 2006 [when Germany hosted the World Cup], it was unclear if the team could or would withstand the pressure. We went on to finish third, then at 2010 we had a very young team and we didn’t know if they would gel into a team.

“Now we know what is possible. However, we also saw this team in a different guise against France and Switzerland but we know expectations are high amongst the German public.”

Should either Spain or Germany fail to shine, the Netherlands are obvious candidates to take advantage and add a second European title to the one they won in 1988.

The Dutch have no shortage of class but, as in previous major tournaments, they have a tendency to self-destruct. This time round, coach Bert van Maarwijk’s decision to play one up front could be the spark for dissent in the Oranje camp.

“I already said that I am disappointed and angry,” said Huntelaar after the squad’s first training session in Poland. “Now I prefer to shut up and to continue to train hard. It would make no sense to say anything more.”

Any discord could be fatal in the so-called “Group of Death.”