LG U+ lays down gauntlet by embracing Video Talk

LG U+ lays down gauntlet by embracing Video Talk 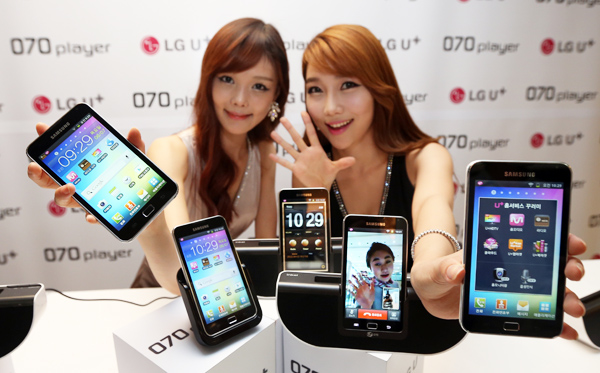 Models present the new 070 Player from LG U+ yesterday. LG U+ said it will lift restrictions on mVoIP, allowing every subscriber to use free phone call services including KakaoTalk’s Voice Talk. Provided by the company


LG U+ will make Voice Talk, KakaoTalk’s free call service, available to all of its users, Korea’s No. 3 carrier said yesterday in the wake of a backlash against the new service from the leading two carriers.

Until Wednesday, the telecom arm of LG Group had banned all mobile Voice over Internet Protocol (mVoIP) services, of which Voice Talk is one.

The unexpected twist came as SK Telecom and KT have been pushing to restrict the use of the service, which was launched on a trial basis on Monday by the nation’s most popular mobile messenger.

“We have decided to lift the restrictions on free Internet phone calls after we held an emergency meeting,” said Lee Sang-min, spokesman for LG U+, at a press conference in Seoul yesterday.

The company may still devise a new payment system or come up with regulations concerning mVoIP after it analyzes the level of traffic generated by Voice Talk and other free Internet call services such as Daum Communication’s MyPeople, Naver’s Line and Skype.

Since Kakao, which operates KakaoTalk, began the trial service in Korea somewhat belatedly this week - it did so overseas late last month - both carriers have claimed they will have no choice but to raise charges.

The only way around this, they maintain, is for the Korea Communications Commission to come up with restrictive measures against mVoIP providers that they define as “free riders” on their Internet networks.

But LG’s aggressive move puts them both in an awkward position.

Although they have yet to come up with an official response, the two carriers are hardly expected to take the news lying down.

“Just because LG has eliminated the mVoIP ban, we are not instantly changing our stance,” said a spokesman for SK Telecom.

The rise of mVoIP, led by Voice Talk, is reminiscent of the manner in which 070 Internet phone calls emerged in 2007.

A large portion of Korean households that formerly relied on landlines converted to the much cheaper service which uses subscribers’ home Internet connection. The number of 070 subscribers now stands at more than 10 million.

Mobile carriers such as SK, KT and LG, as well as Internet broadband service providers such as SK Broadband and cable TV operators, jumped onto the Internet phone service bandwagon that is characterized by phone numbers starting with 070. They gave free phones to subscribers who will use their service for at least two years.

Among 070 service providers, LG U+ has the largest subscriber base of more than 2.5 million. Yesterday, it unveiled a new device called 070 Player to further solidify its position in the market.

“The 070 Player is a new concept in home phones as it combines cheap call rates - the biggest advantage of 070 calls - and smartphone features that provide a range of content,” said Kang Hyun-gu, a manager at the company’s smart home division.

The 070 Player is an Android-based, five-inch Galaxy Player from Samsung Electronics that has added the Internet phone call functionality. If the device catches a Wi-Fi signal its owner can use it anywhere, meaning it is barely discernible from a smartphone save for the fact that it does not function on 3G or long-term evolution (LTE) networks.

Depending on the fixed-monthly charges that a user chooses - from 4,000 won to 19,000 won - the subscription provides up to four hours of free phone calls a month. Those paying monthly fees of 19,000 won, a premium fee system, get the 070 Player for free.

Users of the 070 Player can enjoy unlimited free voice calls and 300 minutes a month of HD video calls.