China Tuesday announced the true size of the Great Wall of China in a new survey that extended its length significantly.

According to China, it reached into Korea’s old northern kingdoms, drawing criticism from scholars. 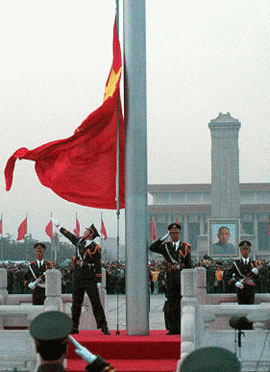 China increasingly is using history to diminish neighboring countries on the pretext of rediscovering its glorious past.

But historians in neighboring countries such as Korea claim it’s inventing a greater past.

Some scholars say Seoul’s conventional reaction to such claims by China is ineffective and Seoul should be more aggressive in defending its history.

China’s State Administration of Cultural Heritage announced Tuesday that the Great Wall was 21,196.18 kilometers (13,170 miles) long, more than twice what was previously known, according to China’s state-run Xinhua News Agency.

The administration claimed that it confirmed the new length after a five-year-long comprehensive, geological survey.

China’s State Administration of Cultural Heritage said that the extended length in the latest survey was as a result of excavations of walls built in the Qin and Han dynasties.

The newest estimate of the Great Wall covers 15 Chinese provinces, from Xinjiang in the west to Heilongjiang in the east.

There were claims from Chinese historians in the past that the Great Wall existed in the northeastern region of China, the site of the kingdoms of Goguryeo and Balhae. Tuesday’s announcement was the first time the Chinese government made the claim official.

Seoul’s Ministry of Foreign Affairs and Trade said yesterday that it won’t ignore a distortion of Korean history and it will respond after studying China’s claim.

“The Ministry of Foreign Affairs and Trade will closely look at the contents with the cooperation of the Northeast Asian History Foundation and other parts of the academic community to see whether there is any distortion in it. If there is, we will sternly deal with it,” said ministry spokeswoman Han Hye-jin during a briefing.

Some local scholars said the Korean government will probably end up expressing “regret” about China’s claim, as it previously did.

“China is repeating its Northeast History Project based on the premise that all history that happened in the current Chinese territory is all its own,” said Lee Seong-je, a researcher at the Seoul-based Northeast Asian History Foundation.

“We need to raise a question over the very premise of the Northeast History Project.”

Han Gyu-cheol, a history professor at Kyungsung University in Busan, urged the Korean government to take a more active role in dealing with China’s historical distortion.