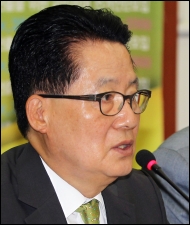 Democratic United Party floor leader Park Jie-won urged his party yesterday to stay away from pro-North Korean Web sites as the leadership of the main opposition party tries to control the fallout over the pro-Pyongyang sympathies of opposition lawmakers.

But another DUP lawmaker came out yesterday with belittling remarks about people who defect from North Korea to the South.

“Uriminzokkiri is a North Korean Web site, so we should not log on to it,” said Park at the National Assembly, referring to the propaganda Web site of the North’s Committee for the Peaceful Reunification of Korea.

His remark was in response to media reports that Lim Soo-kyung, a DUP lawmaker embroiled in the pro-North sympathies controversy, tweeted content from the Web site.

“We know we should not retweet it,” Park said. He also said his party will look for ways to ease public concerns over its ideological line.

The controversy that started with a rigged primary of two pro-North lawmakers from the minor opposition Unified Progressive Party has turned into a full-fledged war between the conservatives and the liberals, with the latter warning of a “new McCarthyism” being waged by the ruling party and the administration.

Park criticized the conservative party for trying to turn back the clock to the eras of military rulers Park Chung Hee and Chun Doo Hwan, and urged his party members to unite to overcome it.

Park said DUP members should not overreact. “In order for us not to fall into the trap set by the Saenuri Party, [President] Lee Myung-bak and [Saenuri’s presidential hopeful] Park Geun-hye, we need to be careful,” he said.

Lim made headlines when she had an alcohol-fueled argument with a 28-year-old defector from the North, Baek Yosep, after a chance meeting in a restaurant. Lim called Baek a “traitor” for defecting from the North. Lim later apologized to the public saying she was drunk at the time and the “traitor” remark was not directed at the defector.

Choi raised the suspicion that the conservatives arranged for Baek to encounter Lim at the restaurant.

He also criticized some North Korean defectors, saying they are making money selling “trash information” about the North to the South.

Shim Jae-chul, who is on the Saenuri Party’s Supreme Council, said yesterday that the DUP cannot hide the existence of a substantial number of pro-Pyongyang lawmakers.

But other Saenuri lawmakers are worried the war may backfire.

“Waging a right-left ideological battle in the post-ideology era could hurt us in attracting moderates to our side,” said Nam Kyung-pil, a Saenuri lawmaker, yesterday.