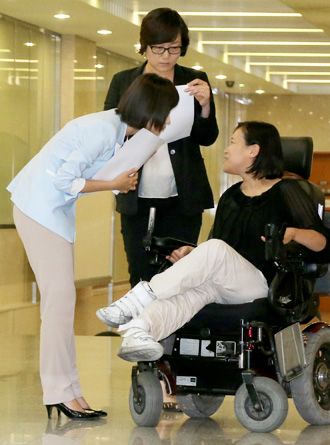 Kim Jae-yeon, left, Hwang Seon, center, and Cho Yoon-sook consult each other yesterday in the National Assembly before they held a joint news conference to issue their objection to the Seoul chapter’s decision to expel them. [YONHAP]

The UPP’s Seoul chapter had a nine-hour-long discussion through Wednesday night and reached a decision to kick out the four members who were chosen in the March proportional primary. Lee and Kim actually entered the National Assembly while the other two, Hwang Seon and Cho Yoon-sook, are alternates in case any of the party’s other proportional representatives resign.

Still, the party’s largest faction, the pro-North Korea Gyeonggi Dongbu Alliance, is resisting the decision. All four of the ejected members belong to that faction, which is accused of having rigged the primary to favor its loyalists.

The party’s Central Steering Committee will make a final decision. If any party member raises an objection to the regional chapter’s decision, the committee will have 14 days to reconsider the case. 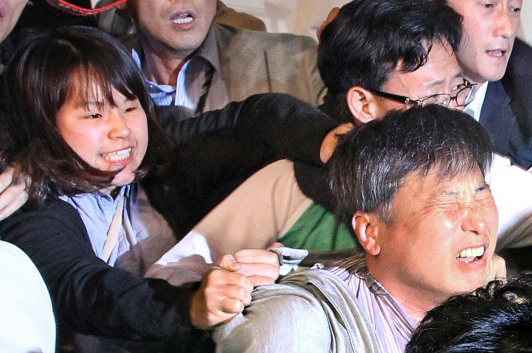 Even if the Central Steering Committee kicks out all four, Representatives Lee and Kim can keep their parliamentary seats as independents.

“It’s political murder of the story that could have occurred under the military dictatorship. We will employ all means, including legal measures, to fight the unjust decision,” said Kim.

Lee told reporters yesterday that he will consider filing an objection to the decision and other options.

Separately, a party committee yesterday filed complaints against 16 party members who violently interrupted the Central Steering Committee meeting on May 12 to the party’s disciplinary panel.

The party’s leadership at the time tried to pass a motion nullifying the candidacies of the 14 members who won votes in the March primary. A group of party members stormed the podium and violently attacked the leadership, causing a serious neck injury to one of the leaders.

“We conducted an investigation into the violence, inspecting CCTV footage, media photos and video,” said Lee Hong-wi, the leader of the party’s truth committee. “We have asked all 16 members to submit explanations for their behavior, but none did.

“We will report all of them to the regional chapters they belong to and demand heavy punishments for the 13 people who wildly disrupted the conference.”

The committee will announce the final investigation results on the violence case on Wednesday.

The party’s smaller faction began a signature campaign against lawmakers Oh Byeong-yu and Kim Mi-hee on a charge of defying the decision by the Central Steering Committee. Oh chairs an emergency council created by the party’s largest faction.