Buddhists to tighten up on philandering monks

Buddhists to tighten up on philandering monks 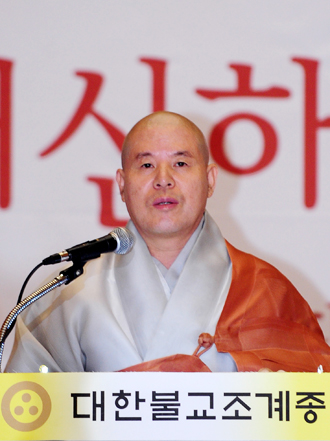 The country’s largest Buddhist sect, which recently came under fire after revelations of licentious behavior by monks including drinking, gambling and tomcatting, announced reform measures yesterday.

Venerable Jaseung, executive director of the Executive Office of the Jogye Order of Korean Buddhism, revealed the first stage of the order’s reforms at a press conference yesterday at the Jogye Temple, the order’s chief temple in Jongno District, central Seoul.

“The order’s recent disgraces and outdated management policies are linked,” said Jaseung. “A fundamental and comprehensive reform is necessary,” he said, “and it’s time for the order’s management to become fair and systematic.”

To implement the reform measure, the sect will have external auditors inspect the executive office and the results will be discussed openly with monks and the public.

The order said the daily lives of its monks would be regulated more stringently. Punishment for those who violate regulations will become more severe, while the order will also look into eliminating political squabbles within the order.

Leaked video of the drinking and gambling monks has been linked to a power struggle within the order.

Venerable Seongho, a former official of the executive office, informed the police last month that eight monks gambled with hundreds of millions of won in April in a suite in the Baegyang Hotel in Jangseong County, South Jeolla.

Allegations snowballed as the whistleblower further accused high-ranking monks of chronic gambling and even paying for sex, which prompted investigations within the order and by the police.

Nonetheless, the reforms will not all be enacted right away, but will be instituted gradually.

This year’s focus will be on the management of the order’s temples including the Jogye, Bongeun and Yaksa temples in Seoul, the Seonbon Temple in Daegu and Bomun Temple on Ganghwa Island, Incheon, along with the finances of 17 of the temples will be made transparent. If this is successful, the measures will include the head office next year. Reactions to the reforms were mixed. Venerable Jugyeong, who will participate in a high-level meeting to pass the measures next week, said, “I feel uncomfortable because it feels like many monks that have lived responsibly are being condemned by the reform measures.”