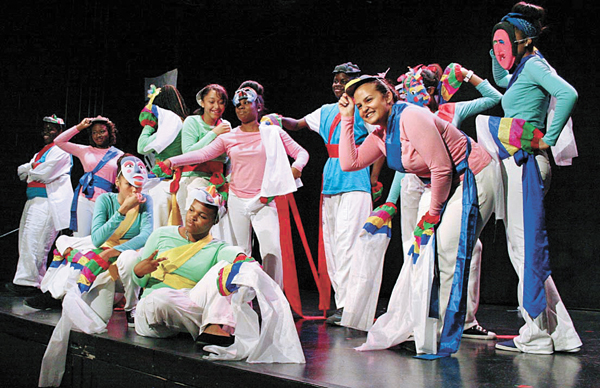 Students of Democracy Prep Charter High School in Harlem, New York, perform a traditional mask dance during a Korean culture festival on June 1. Korean is a required second language at the school. By Lee Jong-haeng


NEW YORK - A public school in Harlem is taking tips from Korea to boost its students’ education.

After benchmarking the regimented way that children study in Korea, Democracy Prep Charter High School makes its students study longer hours than their neighborhood peers, while also requiring them to study Korean as a second language.

Although most of the 200 students are African-American or Hispanic, the man who founded the affiliated middle school in 2006, 31-year-old Seth Andrew, worked in Korea as an English teacher at a public school and was impressed by the work ethic and the respect afforded to teachers.

“There is a strong belief in Korea that if you work hard, you will be able to succeed. Such a belief is important in the United States, especially in Harlem,” said the New York native.

He said he chose Korean as a second language to give the children, most of whom are already fluent in Spanish, a “new challenge.” Phonetically, it was also easier to master than other Asian languages like Chinese or Japanese, he said.

Students, 80 percent of whom come from low-income households, spend three years learning it, and this has led some to develop an extra-curricular interest in K-pop, Korean cuisine and Korean martial arts like taekwondo, he added.

This was evidenced on June 1, when the public school, located on 133rd Street and Seventh Avenue in central Harlem, held its third “Korean Night” festival for parents.

Some students performed a traditional Korean Bongsan Talchum, or traditional mask dances, others showed the lethal kicks and punches of taekwondo, and a choir sang the de facto Korean anthem, “Arirang.”

The school is known for its strict regulations. Classes run from 7:05 a.m. to 5:15 p.m., ending two hours later than at other public schools. Lunch and snacks are provided for free.

The results are already impressive, as 99 percent of students pass the English portion of the Regent Exams - a New York State exam system that high school students take to receive their diplomas - and 98 percent pass the math section.

More than 90 percent of test takers pass all of the Regent Exams, including algebra, chemistry and global history, giving the school one of the highest rates in the state.

The school earned top marks from the city’s education department for its advances made in the 2010-11 academic year.

As part of its language program, the school plans to take its 11th graders on a trip to Korea this year for the first time.