Morning-after pill to be sold without prescription

Morning-after pill to be sold without prescription 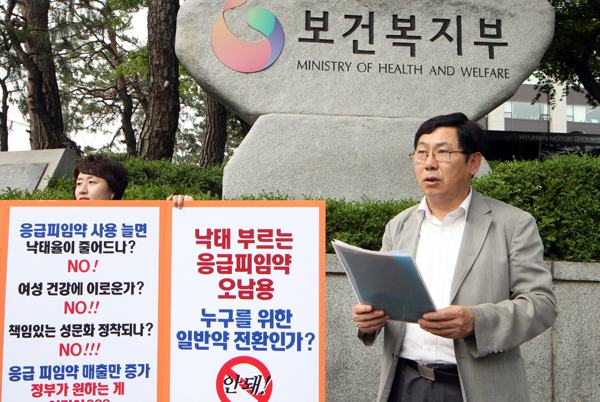 In front of the Ministry of Health and Welfare yesterday in Gye-dong, central Seoul, obstetricians stage a rally to protest the decision to allow morning-after pills to be sold without a prescription nationwide as early as next year. By Choi Seung-shik


The morning-after pill will be sold without a prescription at pharmacies nationwide from as early as next year.

The Ministry of Health and Welfare and the Korea Food & Drug Administration (KFDA) announced their decision yesterday after a long debate among government officials, doctors, and religious and civic groups. 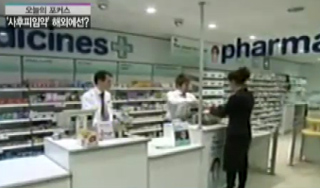 “We have decided to reclassify emergency contraceptive pills as an over-the-counter drug instead of a prescription drug considering that hardly any side effects have been reported,” said Cho Ki-won, an official from the KFDA.

“The pills are also taken only once in cases of emergency and not on a regular basis.”

Morning-after pills prevent a woman from getting pregnant if taken within 72 hours of sexual intercourse.

Civic groups championing women’s rights, including the Citizens’ Coalition for Economic Justice, and consumers are proponents of the pills being sold without a prescription at pharmacies.

They say it is difficult for people to get the pills on holidays and weekends when most hospitals close, and that can keep people from getting them within the 72 hours, leading to undesired pregnancies.

Morning-after pills, which were introduced in Korea in 2001, can also help prevent unwanted pregnancy due to rape or torn condoms, according to the KFDA.

Religious groups, however, have argued that allowing easy access to morning-after pills “devalues life.” Medical groups, who stand to lose profits once the pills are available over-the-counter in pharmacies, have said they are worried about the pills being overused.

The KFDA said it will discuss the issue with representatives of religious and other groups in public hearings. It added that it will enhance sex education at schools.

In Canada, there is no age restriction.

The Korean government will follow the path of the U.S. and the U.K. by not allowing minors to buy them without a doctor’s prescription.

Meanwhile, the KFDA said yesterday it has tightened regulations on purchasing oral contraceptive pills, or ordinary birth control pills, by designating them prescription drugs instead of over-the-counter drugs.

Oral contraceptives have been classified as ordinary pills sold without a prescription since the 1960s, when they were first introduced in Korea. The government allowed easy access to the pills as part of its birth control policy.

The administration, however, noted that oral contraceptives need to be taken for a longer period - 21 days - in order to prevent pregnancy, and affect a woman’s hormone levels. They can cause blood clots, myocardial infarction and strokes in case of women who smoke.

Other countries like the U.S., Japan, the U.K., France, Germany and Italy have also classified oral contraceptives as prescription drugs.

Along with a reclassification of contraceptive pills, the KFDA also changed 273 over-the-counter drugs into prescription medications and did the reverse for 212 drugs.

“We will complete the reclassification of drugs by next month and announce a final list,” said Kim Sung-ho, a KFDA official.