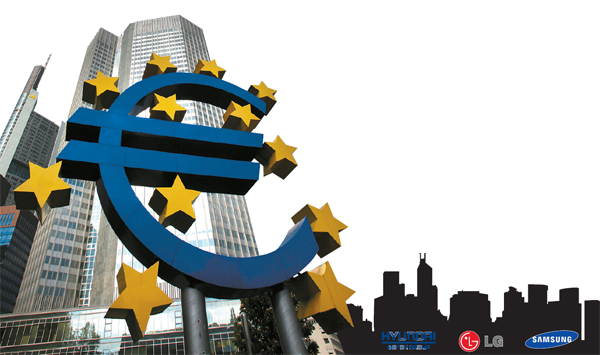 Has the Korean economy bounced back in the second quarter despite the euro zone’s fiscal woes still affecting every inch of the globe?

Not according to a survey of 10 conglomerates earlier this week by the JoongAng Ilbo. Seven said they expected their sales and operating profits to drop by up to 20 percent from their original prediction.

All 10 said they are uncertain what the rest of the year holds in store in terms of economic outlook.

GS Caltex and Korean Air said they are busy securing greater liquidity, while SK Telecom and Hanwha said they may scale back planned M&A deals if economic conditions worsen.

The other conglomerates that participated in the survey are Samsung Electronics, Hyundai Motor, LG Electronics, Lotte Shopping, Posco and Hyundai Heavy Industries.

Some have already adopted emergency management operations, and others are looking to follow suit.

This was evidenced when Hyundai Oilbank CEO Kwon Oh-gap called in executives for an emergency meeting on Monday.

The meeting came after prices of crude oil and petroleum products declined significantly due to the lingering euro zone fiscal crisis and news of the U.S. unemployment rate edging up to 8.2 percent in May.

In the meeting that lasted more than an hour, executives agreed to adopt stricter measures by requiring employees to come to work 30 minutes earlier than usual.

They also agreed to cut budgets by up to 20 percent after identifying ways to streamline each business bureau.

“The new measures are intended to keep employees on their toes given the prevailing sense of economic uncertainty,” Kwon said.

Hyundai Oilbank’s emergency management system came into effect for the first time since the 2008 financial crisis.

Moreover, seven other conglomerates surveyed have taken a similar path by holding emergency meetings presided over by their CEOs.

Samsung Electronics is scheduled to hold a global management strategy meeting from June 25 to June 27. The annual gathering comes 15 days ahead of its traditional schedule as Chairman Lee Kun-hee told executives after his business trip to Europe that the region’s economic situation was worse than he had realized.

Lee left for a three-week trip on May 2 to learn more first-hand about Europe’s ongoing challenges.

Hyundai and Kia recently tightened their 24 hour real-time monitoring system on market trends in Europe. The continent accounts of one-sixth of the two automakers’ overseas sales.

Major changes in European market trends are directly reported to Hyundai Motor Group Chairman Chung Mong-koo, according to officials at the carmaker.

Meanwhile, LG Group Chairman Koo Bon-moo has since Tuesday been discussing ways of hammering out long-term strategies to cope with the financial pinch with executives of the conglomerate’s affiliates. The intermittent talks are scheduled to run for a month.

“Chey gets briefed about the situation there from the SK Research Institute for Supex Management on a weekly basis,” said Kim Soo-gil, a senior official at SK. “He’s paying more attention to issues that could affect the management of SK Hynix, which the group acquired this year.”

Despite the unfavorable economic conditions, the conglomerates said they will continue investing in new businesses and keep this year’s recruitment plans on track.

Samsung Group said it will hire a record 26,000 employees this year and carry out more corporate social responsibility programs.