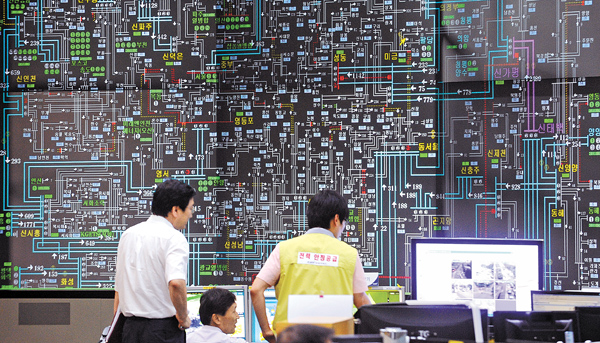 Officials at the Korea Power Exchange monitor the electricity supply and consumption at its management center in Gangnam District, southern Seoul, on Thursday afternoon. On the same day, the government initiated its emergency monitoring system after the electricity reserve fell below the safe threshold. [NEWSIS]

The Korea Electric Power Corporation may soon see its desired utility bill hike realized as the government is discussing the issue in earnest after unexpectedly high usage pushed the national reserve below the safe threshold on Thursday.

The Ministry of Knowledge Economy convened an emergency meeting yesterday to discuss raising the price of electricity by 13.1 percent, as requested by Kepco, after the reserve dipped below four million kilowatts in response to unseasonably hot weather.

The Ministry of Strategy and Finance has also been weighing in on the request and whether it can be justified in light of the government’s ongoing fight with inflation.

“If the electricity rate needs to be raised, it had better be lifted before the peak season in July,” Minister of Knowledge Economy Hong Suk-woo said at a seminar on Thursday. 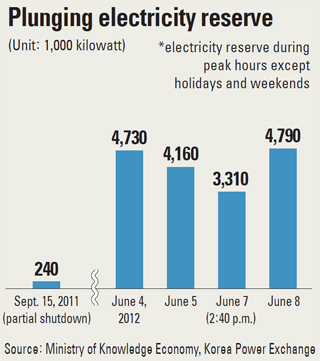 He said that in order to stave off a supply shortage the public must strive to reduce usage by unplugging appliances when they are not in use and keep doors closed when air conditioning units are switched on.

Kepco claims the current price of electricity is too low as it only covers 87.4 percent of its production cost. Local industry opposes any hike.

The government was caught off-guard on Thursday as the reserve plummeted to 3.5 million kilowatts for the first time since Sept. 15, when parts of the nation were plunged into darkness as the government temporarily turned off the electricity supply from region to region.

In fear of another blackout this year, especially as the mercury is set to climb in the coming months, authorities are now pooling ideas to preempt another energy crisis.

“The reserve dropped to 3.5 million kilowatts at 1:35 p.m. [on Thursday], and we responded with first-stage emergency procedures,” Lee Kwan-sup, deputy minister for energy and resources policy at the Ministry of Knowledge Economy, told the press on Thursday.

“Considering the recent supply shortage, the reserve is likely to fall below the safe level often,” said Lee. “As we may end up having to cut the power from region to region, we have decided to conduct a drill on June 21.”

The situation is exacerbated by the higher than normal temperatures affecting the peninsula this summer as well as the fact that a number of power plants are still under maintenance after operating at full capacity over the winter.

The Gori-1 nuclear reactor has been under repair since March, while the Uljin-4 has been idle since September. This translates into 11 million kilowatts of lost production. The Ministry of Knowledge Economy said supply will approach full capacity of 77 million kilowatts next month.