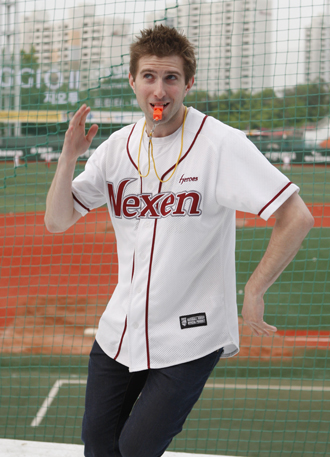 Ted Smith blows on his whistle and cheers on the Nexen Heroes during a game against the SK Wyverns last Tuesday at Mokdong Baseball Stadium in Seoul.Provided by the Nexen Heroes

“Mom, it’s Ted-Jjang! Ted-Jjang!” a young Nexen Heroes baseball fan cried out, pointing at Ted Smith, a Canadian leading the section in cheers. Smith smiled and corrected - it’s not Ted-Jjang, it’s Ted-Jjing. When asked why, he replied that he was used to it and that the nickname was both cute and easy on the ear.

The 25-year-old is an avid fan of the local Nexen Heroes baseball team and was recently named an honorary cheerleader. His spirit for the club was evident when he climbed onto the cheerleaders’ platform at a game last season and led the squad in a cheer - with surprisingly near-perfect technique.

His popularity among other fans rose quickly, with many now referring to him as Nek-tongryeong (a word formed by attaching the word Nexen and the Korean word for president, daetongryeong). When local media caught on to the Canadian sensation, Smith modestly revealed that he was the leader of his high school and university cheerleading squads and was just doing what he loves.

Smith travels from city to city including Busan, Daegu and Daejeon to cheer on the Nexen Heroes, carrying with him his signature bright orange whistle and digesting some liquid courage before the game.

The avid fan graduated from McGill University in Montreal with degrees in English Literature and East Asian Linguistics and began to learn Korean in the final year of his university studies. With an intermediate level of fluency, Smith has no problem communicating with fellow Nexen fans.

Smith said that after having been impressed by the devoted and animated sports fans in Korea during the 2002 Korea-Japan FIFA World Cup, he decided to visit the country for the 2010 World Cup to participate in and experience the City Hall action for himself.

During his visit, he tagged along with a friend to see a ball game at Mokdong Baseball Stadium and was “blown away” by the fans. When asked what was so striking about Korean baseball, Smith responded that the atmosphere was very enjoyable and different because whereas Korean fans sing songs throughout the game, the audiences in Canada and the United States just sit and talk. Smith added that Korean baseball games are more fun to watch than the New York Yankees, for instance.

After settling down in Korea since March of 2011, Smith has attended every Nexen baseball game and can be seen enthusiastically singing and dancing along with the team’s anthem. It wasn’t a surprise to anyone when he won the top prize in the dance contest that was open to the audience last year.

He made his cheerleading debut on Sept. 4 of last year in Daejeon despite the relatively low level of enthusiasm in the Nexen crowd, which ended the season with the worst record in Korean baseball. But losing games didn’t dampen Smith’s spirit.

And that attitude has caught on with the entire organization. The Heroes have shocked the league in 2012 with a strong start to the KBO season, setting new records for the longest win streak in team history and battling with the league’s powerhouse teams.

Mokdong Baseball Stadium has been selling out consistently this year. When asked if this effect has been inspired by Smith himself, the dedicated Nexen fan said it was all due to the players like Lee Taek-keun and Kim Byung-Hun.

Smith said that when he walked toward the field to get signatures from Nexen players at the last game of the 2011 season, he became too busy signing his own signature for fellow fans.

Korean baseball made quite an impression on Smith when he first walked into a KBO stadium - and it seems clear to fans of the league that Smith himself has made a lasting impression on the Nexen Heroes.