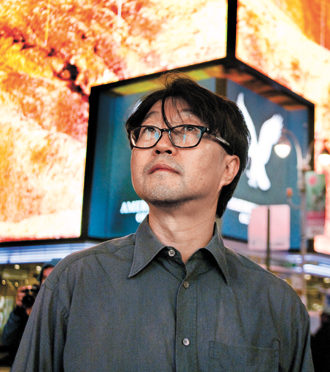 NEW YORK - At 11:47 p.m. on Monday, a video clip of a desert panorama suddenly appeared on electronic billboards in Times Square, New York. The video appeared on one building and moved across 40 different skyscrapers’ billboards in the next 13 minutes, creating the image of a never-ending desert.

Pedestrians stopped walking and pulled out their smartphones to photograph the scene themselves.

The 13-minute art video “Buoy” has been showing since June 1 every night at same time with the purpose of conveying arts to the public through Times Square’s iconic billboards. The project was launched in April with the Times Square District Alliance’s sponsorship. A 52-year-old Korean artist, Cho Seung-ho, creator of “Buoy,” was selected as the artist for June among a total of 350 contenders.

“The electronic displays in Times Square are like a Grand Canyon created by humans,” Sherry Dobbins, director of public art at the Times Square Alliance, told the JoongAng Ilbo.

“We thought Cho’s art work expressed the harmony between humans and nature by showing images of the Death Valley desert in California in the world’s most showy forest of buildings.”

Cho recorded the desert from a car in 2008. The original clip is six minutes and 21 seconds long but was edited down for the New York project.

“I was slightly puzzled when I received a call from the Times Square Alliance,” Cho said.

Cho has established a solid foothold as a video artist in New York and Europe. He has held a private exhibition at the Museum of Modern Art in New York (MoMA) and the Busan Museum of Art in Korea and also was invited to the International Short Film Festival Oberhausen in Germany for an eighth consecutive year. Many of his art pieces are housed in famous galleries including the MoMA. The “City of Light,” which hangs at the Los Angeles International Airport, is also one of Cho’s works.

“Cho tries to show human instincts with images of nature,” Josh Klein, director of public art at the Electronic Arts Intermix, a nonprofit arts organization for video and media art in New York, told the JoongAng Ilbo. The organization distributes both of Cho’s artworks worldwide.

“Cho’s art also reflects technological advancement,” he said. “?‘Buoy’ was shot in high definition, which is one of the reasons the Times Square Association has selected his art.”