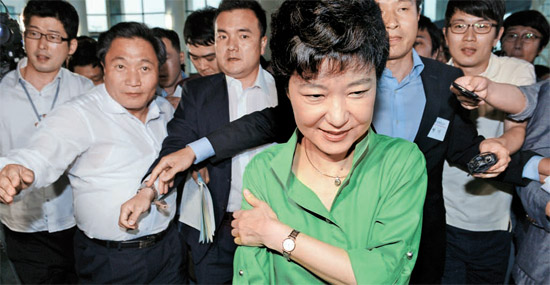 Three ruling party politicians who want to run in the December presidential election said they will boycott the party’s primary unless presidential frontrunner Park Geun-hye agrees to a so-called “open primary,” in which the candidate is chosen by a popular vote among citizens regardless of their party affiliation.

Currently, the ruling party’s nominee is decided by a combination of party delegate votes (which accounts for 20 percent of a candidate’s final score), party member voting (30 percent), voting open to the general public (30 percent) and opinion polls (20 percent).

Aides to the three presidential hopefuls, who are not members of the party’s pro-Park faction, issued a joint statement and held a press conference yesterday to put pressure on her over the primary. The aides said that the party’s leadership, which is controlled by Park loyalists, is planning to launch a “primary preparatory committee,” without changing the primary rules.

“Launching a primary preparatory committee is meaningless without adopting a nomination rule that reflects party members’ opinions,” the aides said in the statement.

Ahn Hyo-dae, a ruling party lawmaker and a loyalist of Chung, said at a press conference yesterday, “If the party’s leadership doesn’t keep fairness and impartiality in the candidate nomination procedure, it will harm the party’s harmony and the competitiveness of the party’s candidate in the presidential election.” They said they wouldn’t attend a party-wide conference scheduled for yesterday.

“We non-Park loyalists will boycott the conference because we can’t agree on the party’s one-person, dictatorial leadership that pushes ahead with a primary rule designed only for that person,” Kim Yong-tae, another ruling party lawmaker who is a loyalist of Governor Kim, said at the press meeting. “We express our strong will by this boycott.”

Park is scoring more than 50 percent support in recent opinion polls about presidential candidates. Her intra-party rivals have approval ratings around 1 percent each. Park said on May 23, “Players should follow a rule, the rule shouldn’t change for the players.”

Park loyalists told the JoongAng Ilbo that she thinks an open primary would lead to mass irregularities as voting is open to the public on the Internet in real-time.

Political observers say Park’s rivals can’t get votes from within the party she dominates and want instead to attract votes from anti-Park Koreans, including people who have bad memories of her father, former president and strongman Park Chung Hee.

The party leadership is supposed to finish its primary by Aug. 21, 120 days before the election on Dec. 19.