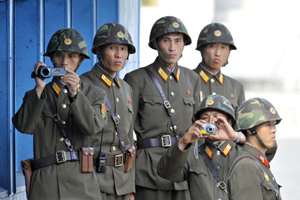 Seoul yesterday sent a notice to Pyongyang to make its first repayment of food loans that were given during two previous administrations. The due date for the first repayment was Thursday.

“The Seoul-based Export-Import Bank of Korea sent a letter of notification to the president of North Korea’s Chosun Trade Bank this morning that urges the regime to pay back the loans,” Kim Hyung-suk, spokesman of the Ministry of Unification, said at a briefing yesterday. “The letter reconfirmed that the regime would be in default on the loan if they don’t pay after 30 days.”

The two Koreas signed an “Agreement on Provision of Food Loans” in September 2000 as a follow-up to the first-ever inter-Korean summit in June 2000 between South Korean President Kim Dae-jung and North Korean leader Kim Jong-il.

Under the agreement, the South provided the North with 2.4 million tons of rice and 200,000 tons of corn, worth $720 million in total, in six batches until 2007, throughout President Roh Moo-hyun’s term. The North was supposed to pay back the loan over 20 years after a 10-year grace period at an annual interest rate of 1 percent. In May, Seoul reminded Pyongyang of its obligation to make the first repayment of principal and interest, $5.83 million, by June 7. Pyongyang hasn’t responded.

The Export-Import Bank of Korea said that Pyongyang should repay compensation charges after the due date at an annual interest rate of 2 percent for the first repayment.

But it’s unclear whether Pyongyang will pay. The regime has publicly said that the food aid is a “reward” for approving reunions for families divided between the two Koreas and for attending the inter-Korean summit in 2000. “The government asks North Korea to sincerely implement the repayment under the inter-Korea agreement for the food loans, which were paid for by the taxes of South Koreans,” Kim said.

Almost all inter-Korean dialogue stopped since the Lee Myung-bak administration imposed sanctions against North Korea on May 24, 2010 in the aftermath of the deadly sinking of the Cheonan warship.