Chopper in Peru with 8 Koreans goes off the radar

Chopper in Peru with 8 Koreans goes off the radar 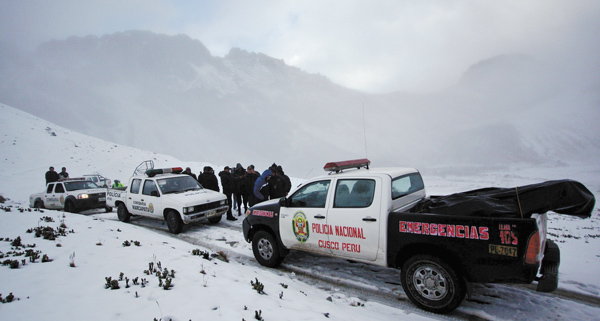 Police officers prepare to search for 14 people, including eight Koreans, who were on a helicopter that went missing while flying from the town of Mazuko to Cusco in the southeastern part of Peru. [YONHAP]

A helicopter carrying 14 people, including eight Koreans, went missing in the southeastern part of Peru, the Ministry of Foreign Affairs and Trade said yesterday. The last communication with the helicopter, which was flying from the town of Mazuko to Cusco, was made on Wednesday afternoon, one hour after it took off.

The ministry confirmed yesterday that the eight Koreans who were on board were employees of four major Korean firms: Samsung C&T, the Korea Water Resources Corporation, the Korea Engineering Consultants Corporation and Seoyeong Engineering. They had visited a potential hydropower plant site near Mazuko. The helicopter was also carrying three Europeans from Sweden, the Czech Republic and the Netherlands, and three Peruvians, including the crew.

The Peruvian Air Force has detected a signal from the missing helicopter and has roughly confirmed its location.

Kim Wan-jung, an official at the Korean Embassy in Lima, was quoted by Yonhap News Agency saying, “The helicopter was located between the cities of Mazuco and Cusco in southeastern Peru at a latitude of 13 degrees and 27 minutes south and a longitude of 71 degrees and seven minutes west.” 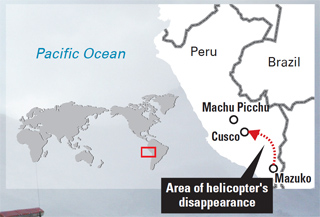 “The Peruvian Air Force has found the coordinates of the GPS signals apparently sent from the missing helicopter,” Kim said. “The signals were detected at around 11 a.m. today [Thursday], and the exact coordinates were confirmed at around 4 p.m.”

Search efforts, however, have been suspended due to bad weather and were due to resume Friday morning, local time. The Peruvian government dispatched a search team by air and land. The mountainous area where the helicopter went missing, which is 4,600 meters (15,000 feet) above sea level, is known to be piled with snow.

The ministry said Kim asked for more support in finding the missing Koreans and Minister Roncagliolo “offered words of comfort by saying that the Peruvian government will do its best to locate the helicopter as quickly as possible and rescue the passengers on board.”

According to the Korean Embassy in Peru, the missing helicopter was an old aircraft that has been flying since 1975. The S-58 ET helicopter is owned by Helicuso, based in Cusco. The last time the helicopter changed its engine was in 1990, and it can fly 14 to 15 people. The aircraft is known to have had no accidents on record. “Two Korean Embassy officials in Peru have been dispatched to the site immediately,” said an official from the Foreign Ministry. “We weren’t able to find the exact cause because we haven’t found the helicopter yet, but from previous cases, the helicopter could have gone missing because of bad weather or technical problems.”