Korea’s pickpockets not quite a thing of the past

Korea’s pickpockets not quite a thing of the past 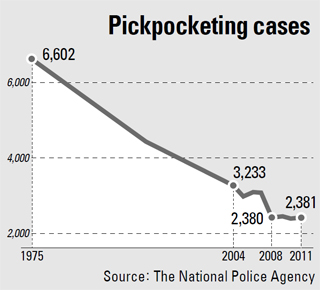 A 64-year-old man surnamed Noh was caught barehanded trying to pickpocket a smartphone off a man at Anguk Station in Jongro District, central Seoul, last Sunday. Police spotted the crime on a live CCTV feed from the area and swooped in. The cameras captured Noh being cuffed and led away.

It was a pathetic end to a storied career. Back in his heyday in the 1980s, Noh was part of an organized group of pickpockets who called themselves Yeongcheolpa, or “Gang of Great Discerning Men,” who prowled the crowded streets of Myeongdong, downtown Seoul, looking for loose wallets and open purses.

In his 1997 novel, “Hwanggeumbineul” or “Golden Scales,” bestselling author Lee Wae-su depicted in detail the world of the pickpockets from the 1980s and 90s. He portrayed training scenes, in which newbies are taught by veterans to slip a wallet from a mannequin’s pocket without ringing a bell attached to it.

It turns out, pickpockets are not a quaint memory from Korea’s poorer past. Some of them have slid into not-so-genteel poverty, and still use their old skills to earn what you might call “pocket money.”

The police described Thursday an exponential decrease in pickpocket cases over the past forty years. In the 1970s, there were 6,660 cases of pickpockets per year, and in the 1990s an average of 4,400 cases. This continued to shrink to 3,233 in 2004 and for the past four years the figure has plateaued at around 2,300 cases, according to the National Police Agency.

The decline is largely due to prosperity and also linked to the increased use of credit cards since 2000, which led to less cash in wallets. There were two National Police Agency squads, first established in 1983, that specialized in pickpocket prevention and cruised Seoul department stores and marketplaces. They were terminated in 1999.

But pickpockets haven’t died off completely. And the ones still plying their trade have migrated to rural areas or tourist hot spots.

“Pickpockets are drawn to rural districts because many department stores have sprung up, and district governments hold a lot of festivals that draw crowds,” a police spokesman said. “And there are fewer CCTVs.”

At the Yeosu World Expo in South Jeolla, which kicked off on May 12, seven elderly women had golden necklaces stolen on the opening day. Today’s Artful Dodger is likely to be middle aged. The women said they were approached by a man in his 60s, who said, “I dropped my glasses. Please don’t step on them.” When a woman bent down to help, the man made a grab for her necklace and disappeared into the crowd. The Yeosu Police suspect a gang of four to five not-quite-over-the-hill pickpockets.

Last month a pickpocket who lifted credit cards from people at race tracks in the cities of Gunpo and Bucheon in Gyeonggi was arrested by Bucheon police. A 56-year-old man with a criminal record, he followed his targets to ATM machines and spotted the person entering his or her password. He would then go after the card. That trick’s called the “magpie eye” in pickpocket lingo.

“Instead of the upper classes,” said Oh Yeon-su, a 52-year-old police officer at the Namdaemun Police Station who has handled pickpocket cases for 25 years, “pickpockets target the pockets of ordinary people.”