After breakthrough, back to the bench

After breakthrough, back to the bench 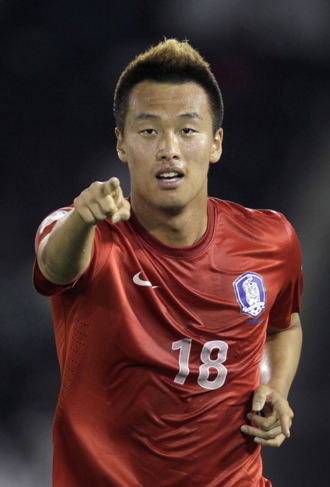 For Ulsan Hyundai FC striker Kim Shin-wook, the World Cup qualifier against Qatar on Saturday (KST) will be unforgettable. On the one hand, he scored his first international goal; on the other, he will miss his team’s second qualifiers against Lebanon tomorrow.

At Al-Saad Stadium in Doha, Kim scored Korea’s third goal against Qatar during the team’s promising 4-1 victory in the final round Asian qualifiers for the 2014 FIFA World Cup. He came on the pitch in the 54th minute as a substitute and scored just nine minutes later.

“Coach wanted me to move around lot, make headers and be aggressive inside the box,” Kim said after the match. “I just followed his instructions and the opponent’s defense started to break down and I got the goal.”

However, Kim will miss the match against Lebanon in Goyang, Gyeonggi, after receiving his second yellow card of the Asian qualifier campaign. He had one yellow card in a third round match against Kuwait in February.

The 24-year-old was one of the pivotal players on the pitch that turned the tide for Korea in the second half and led a second-half comeback in temperatures that reached up to 40 degrees Celsius (104 Fahrenheit).

Korea, ranked 35th in FIFA rankings, seemed to be in danger of being upset by No. 96-ranked Qatar when Yousef Ahmad Ali burst past defender Kwak Tae-hwi and beat goalkeeper Jung Sung-ryong for the match’s first goal in the 22nd minute.

But four minutes later, Lee Keun-ho converted Kim Bo-kyung’s cross from the left flank and made the score 1-1 to end the first half.

Using his 196-centimeter, 93 kilogram body, Kim was a top threat against Qatari defenders. While using headers to drop the ball in front of teammates, he also created spaces for his fellow striker by drawing Qatari defenders.

Right after he entered the pitch, defender Kwak Tae-hwi scored the team’s second goal with a header after a corner kick in the 55th minute when Qatari defenders had their eyes on Kim.

Less than 10 minutes later, it was Kim who put his name on the scoreboard. He made the score 3-1, firing Lee Dong-gook’s pass directly with his right foot in the 63rd minute. After the goal, he kneeled down and pointed to the sky in celebration of his first international goal in nine matches.

Kim, who made his international debut in January 2010 against Zambia, again contributed in his team’s fourth goal when he drew three Qatar defenders in the corner kick situation, creating space for Lee Keun-ho to score.

“Before the match, I had thought of striking a lot of shots,” Kim said. “I heard that Middle East nations are weak in tall players, so I just played with confidence and that worked.”

Coach Choi was also satisfied by Kim’s performance, but lamented that he would not able to play against Lebanon tomorrow.

“We tried to play aggressively to score, and with Kim’s addition we were able to lead the pace of the attack,” Choi said. “However, it’s a pity that he can’t play against Lebanon.”

The Taegeuk Warriors arrived in Korea on Saturday afternoon and resumed their training at the National Football Center in Paju, Gyeonggi, yesterday.