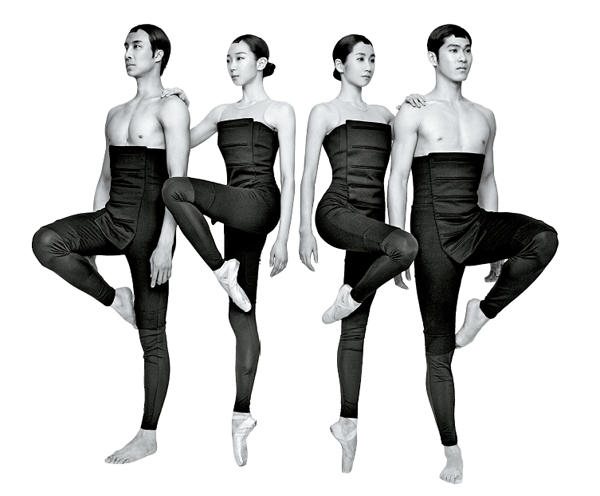 
To mark the 50th anniversary of the Korean National Ballet, the dancers will be doing their twirls on a turntable.

Internationally renowned fashion designer Jung Ku-ho, who was selected as one of 11 fashion designers for the “Vogue Talents Corner,” which is a project aimed at promoting new talented designers by selecting 11 from all over the world, came up with the idea of installing a turntable that has a diameter of 16 meters (52 feet) on the stage.

“Turntables are rarely used in ballet performances but I wanted to use it because it allows the audience to watch the movements of the dancers in all directions. Usually, the audience would only watch the dancers from the front,” said Jung during a press conference on Thursday at the Seoul Arts Center. “

For ‘Poise,’ dancers are required to constantly change their focal points as the turntable, which is as big as the stage, turns nonstop. Such characteristics will no doubt make ‘Poise’ highly refreshing for the audience.”

“Poise” will be presented in two acts of 30 minutes each. Dancers will perform to classical music by Russian composer and pianist Dmitrii Shostakovich.

“About 50 objects on the ceiling will move in a straight line while dancers are on a stage that will constantly turn around,” Jung explained.

The choreography of “Poise,” which doesn’t have a storyline, is done by Ahn Sung-su, a nominee for the Benois de la Danse Award for best choreography in 2006.

“When the artistic director Choi Tae-ji asked me to choreograph ‘Poise’ as the 50th anniversary project, I said I would devote every effort to it,” Ahn said. “I am also confident that many ballet companies in Korea will take this opportunity to engage in more contemporary performances. This should be the representative work of the Korean National Ballet Company for the next 100 years.”

The collaboration of the two renowned figures - Jung and Ahn - isn’t new.

The two have worked together a number of times, and according to Jung, he decided to work on “Poise” because Ahn asked him to.

“We worked together for ‘My Funeral’ in 2004. I designed a very complex stage with 24 cylinders that were nine meters in diameter and 20 centimeters tall, and Ahn choreographed a fun dance,” Jung said. Thanks to Jung’s “complex” stage, Ahn received a grand prize in arts for ballet in 2005.