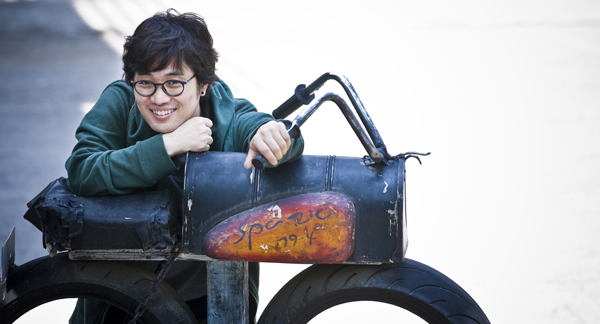 Min Kyu-dong, director of “All About My Wife” poses for the camera on a bicycle sculpture. “Marriage and bicycles work in similar ways,” the director said. “Two wheels need to roll together to stay in balance through communication.” By Kwon Hyuk-jae


The film “All About My Wife” (2012) centers on the struggles of marriage, a topic often broached by Korean rom-coms. Yet, while the plot may seem typical, the turnout has been extraordinary.

As of Wednesday, more than three million have seen the film in theaters, closing in on the four million viewers of “Introduction to Architecture” and battling through blockbuster competitors “Men In Black 3” and “The Avengers.”

In the film, Jung-in (Lim Soo-jung) has strained relations with her husband Doo-hyun (Lee Sun-gyun) from the first day of their marriage. Doo-hyun decides to ask a handsome ladies’ man living next door, Sung-gi (Ryu Seung-ryong), to have an affair with his wife in order to give him an excuse to divorce her.

The director of the film, Min Kyu-dong, 42, made his directorial debut with the horror film “Memento Mori” in 1999. Since then, Min became well known for producing films that delve into human psyche, most notably in “All For Love” (2005) and “The Last Blossom” (2011). 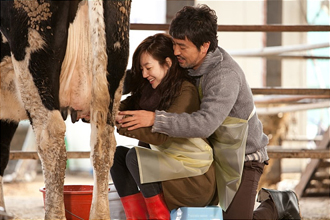 Sung-gi (Ryu Seung-ryong), right, trying to seduce Jung-in (Lim Soo-jung) in “All About My Wife.”

Min sat down with the JoongAng Ilbo to discuss the success of “All About My Wife” and his directorial methods. The following are the excerpts from the interview.

Q. Do you view the film as a success?

A. My friends called me after watching the film and said they walked out at the end of the movie holding their wives’ hands. I still cannot believe we have already hit three million viewers. What surprises even more is that the movie is creating strong desires for marriage among the younger audience.
What is your personal view on marriage?

Last year was my 13-year anniversary. My wife and I told each other, “We’ve made it through.” Marriage is a fantasy and happens when two different people find similarities in each other. Once they find out that they are totally different individuals, the fantasy becomes a reality. Putting two different pieces together through a long process of tuning and healing is what marriage is all about. I wanted to break the fantasy young people have of marriage through this film.


What is the film trying to say about communication in marriage?

The film is trying to convey the message that a lack of communication results in a tragic marriage. I assume that most audience members going through communication difficulties in their marriages could easily relate to the characters in the film. Jung-in’s quote in the film, “Can we have a talk,” is what many husbands fear the most. It is unfortunate that a conversation with a spouse is something to fear. That is the message that the film hopes to explain. Unfortunately, there seems to be a lot of people who can relate to the film, which means the issue of lack of communication in marriage is becoming huge.


Which character in the film do you relate to the most?

I can understand and relate to Jung-in. This character took me out of the dark room that I was holding in myself. Every line that she says in the film is actually what I have been trying to say.

I sometimes feel lonely without having any friend to talk to. This film gave me an opportunity to speak my mind to the audience.

This film seems similar to your previous works, “All For Love” and “The Last Blossom.”

Both films question what true beauty of life is and what makes life more meaningful. These are the main topics that I want to cover in my films. “All About My Wife” also contains questions about the beauty of marriage and communication. I want this film to be a reminder for all audiences that a lack of communication is a problem that both parties need to come together to solve.