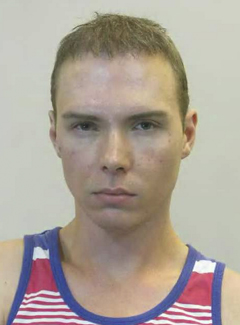 The music playing in the background of the horrific Montreal murder video ? easily viewable online ? is from the 2000 serial killer movie “American Psycho.”

In the film, a wealthy New York banker, played by Christian Bale, hides his alternate psychopathic ego from co-workers and friends as he acts out wild fantasies.

They climax in a notorious scene in which Bale’s character uses an axe to slaughter a colleague, set to the Huey Lewis and the News song “It’s Hip to be Square.”

In the video, Magnotta appears to be filming himself on the night of May 24-25 killing Lin with a pickaxe, to a soundtrack of New Order’s “True Faith,” which plays over the opening credits of “American Psycho.”

In another telling link, the Canadian is reported to have used the pseudonym Tramell when boarding a Berlin-bound bus in Paris ? the same surname as Stone’s character in “Basic Instinct.”

Magnotta was arrested in Berlin on Monday following a 10-day international manhunt.

German prosecutors said Thursday he will likely be extradited to Canada by the end of June to face charges of murdering Lin, believed to have been his lover.
Various parts feared to be of Lin’s corpse have been found ? his torso in a suitcase near Magnotta’s home, and hands and feet sent to Canadian politicians and two schools.

The head has not yet been found, fueling speculation that the gruesome item is still in the mail.

Some have linked the killing to the 1995 movie “Se7en,” in which Pitt and Morgan Freeman play two detectives hunting a serial killer who uses the seven deadly sins as his modus operandi.

The film ends with the grisly discovery of a head in a cardboard box.