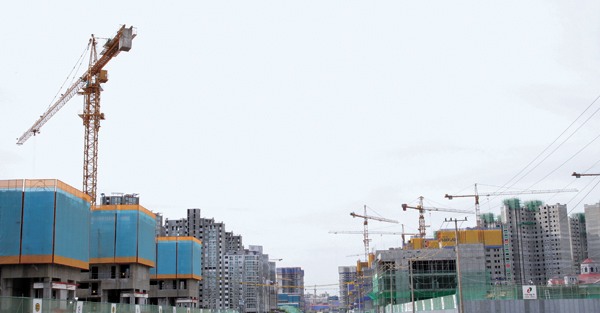 Security at the headquarters of a major local bank in central Seoul was raised last month, with uniformed forces guarding every entrance.

Outside its gates, tensions ran high as a group of middle-aged women with picket signs braved the sweltering heat to make their request heard.

“All we ask is that our syndicated loan payments be delayed,” said one of the picketers.

“If not, our families will face a significant financial burden that could make our lives extremely inconvenient on a daily basis.”

While household debt has already hit the astronomically high figure of 900 trillion won ($766 billion), the high delinquency rate of syndicated real-estate loans is surfacing as a new threat.

Syndicated loans are parceled out to a number of lenders but often administrated by a single commercial bank. As they are more easily approved, they are commonly used for purchases of newly built apartments.

According to the Financial Supervisory Service (FSS), the overdue payment rate of syndicated loans has been on an upward trajectory for the last four months, growing from 1.35 percent at the end of December to 1.84 percent as of April.

This is having a domino-like effect as it spills over to mortgages, where late payment have risen from 0.76 percent of the total in March to 0.79 percent in April. Meanwhile the overdue rate for household loans climbed from 0.84 percent to 0.89 percent over the same period.

“Although the overdue payment rate [for syndicated loans] is not super high, it is nonetheless higher than it has been for the last five years,” said an analyst at a research institute in Seoul.
Market observers say the problem will come when the rising rate of insolvent loans spreads to banks that made huge group loans in the mid-2000s.

Homeowners are becoming increasingly embittered and reluctant to repay what they see as unfairly high loan terms as housing prices are falling disproportionately fast, causing many to suffer huge losses.

Many claim they were misled as construction companies promised new infrastructure projects, such as subway stations, would be built nearby to bump up the value of their properties, but these failed to materialize.

Now more homeowners are refusing to move into their properties and pay off their mortgages as they insist the value of their real estate has dropped and they have been left in a hole.

Banks expanded their syndicated loans from 2006 to 2008 as the real estate market heated up and prices surged to exceptional levels before the global credit crunch hit.

Market observers say the bigger problem lies with mid-term payments, or the lump sum that those who take out syndicated loans must pay when they move in to the property. This usually accounts for 50 percent of the total loan.

In the last six months, the late payment rate for this crucial installment has more than doubled from around 2 percent to 5 percent.

Commercial banks are responding by reducing the number of new loans, but this is considered a temporary band-aid at best.

Financial regulators are now assessing the situation to prevent it from worsening as related law suits pile up.

The authorities fear commission-hunting lawyers are stoking the fire.

According to the financial industry, homeowners who have taken out syndicated loans are currently seeking legal action in about 90 apartment complexes nationwide. Most of the cases are class-action suits.

However, in those cases where the court sides with the construction company the borrowers are left high and dry, saddled with huge debts and overdue interest payments.

“As the disputes grow and more homeowners refuse to hand over their mid-term payments, the overdue rate is getting worse and worse,” said an FSS official.

“Falling apartment prices is a problem that is unlikely to be solved anytime soon, so overdue payments are likely to keep snowballing.”

Kim Seok-dong, head of the nation’s financial regulator, said the government has a grip on the situation and will not just stand by and wait for the market to crash.

“We’ve been preparing against insolvency in the financial market since last year, including improving the soundness of local banks and restructuring savings banks,” Kim said.

“If you look at major economic crises in recent years, including the subprime mortgage in the U.S. the euro zone fiscal crisis, excessive debt has always been the root cause,” he said.

“Household debt has grown substantially in Korea but the rate of expansion has been controlled by two regulations,” he added referring to the debt-to-income (DTI) and loan-to-value (LTV) ratios.

Since last year, the government and financial regulators have been pressuring banks to reduce the number of new loans.

As a result, household debt growth including purchases made on credit, slowed to 7 percent on -year in the first quarter of 2012. This is down from 8 percent in previous quarters.

Others claims the two regulations are the main reason why the real estate market is taking so long to recover.

Kim Seok-dong, chairman of the Financial Services Commission, downplayed such speculation as groundless.

“The demands to abolish the DTI and LTV come from real estate agencies,” he said.

“If the regulations were scrapped, it would be akin to a doctor treating one illness by substituting it for another. Now where is the logic in that?”