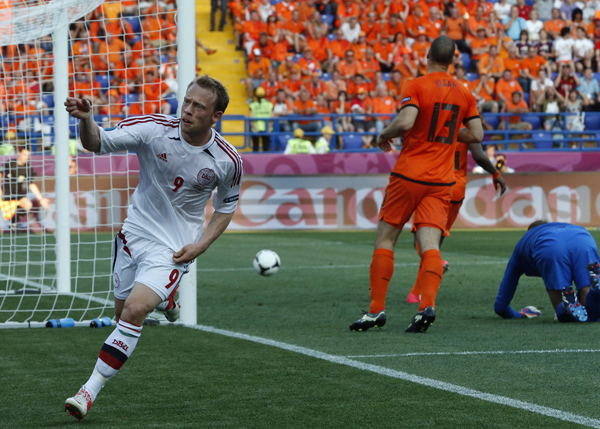 Denmark’s Michael Krohn-Dehli, left, celebrates after he scored during the Euro 2012 football championship Group B match between the Netherlands and Denmark in Kharkiv, Ukraine, Saturday. In the back are Ron Vlaar and goalkeeper Maarten Stekelenburg.[AP/YONHAP]


GDANSK, Poland - The feared Dutch strike force malfunctioned as Euro 2012 crossed into Ukraine on Saturday but Germany proved as reliable as ever when it opened the tournament with a 1-0 win over Portugal.

World Cup runners-up Netherlands had 28 goal attempts in the eastern city of Kharkiv’s spider-like Metalist stadium, but failed to convert any of them in a 1-0 loss to Denmark that leaves them in serious peril in a treacherous Group B.

Michael Krohn-Delhi’s opportunist goal after 24 minutes earned the Danes the victory while later in Lviv, Mario Gomez’s header was enough for Germany to join the Danes on three points.

Just like the eventful opening day, day two produced plenty of eye-catching football and a record with Dutch 18-year-old Jetro Willems becoming the youngest player ever to take the field at a European Championship.

It proved the only highlight for the Netherlands, who must face Germany next week in Kharkiv.

“I’m standing here a little bit speechless, because these three points were very important,” said Dutch midfielder Mark van Bommel.”It’s not over, though. There are two more matches to come. We played very well, but we didn’t win. I prefer to play badly and win 1-0.”

Bayern Munich’s Gomez, guilty of several bad misses in the Champions League final against Chelsea, guided home a 72nd-minute header to settle a cagey clash with Portugal, for whom Ronaldo failed to replicate the form he displays for Real Madrid.

German fans were warned about throwing objects, apparently scrunched up paper, on the pitch in the first half, although more worrying for tournament organizers were reports of four stewards taken to hospital after a clash with Russian hooligans the previous night after the Russia-Czech Republic match.

“Such things can occur over the next 22 days. If it gets hot, drinks will be consumed and such things can happen. It’s a normal situation,” Marcin Herra, head of the Polish company in charge of coordinating the finals told local television.

Co-host Ukraine’s long-awaited big day was also tempered by ongoing off-field politics as the controversy over its human rights record refused to go away.

Officials of Denmark and Netherlands met victims of alleged police torture in Kharkiv, where opposition leader Yulia Tymoshenko is jailed.

Sports ministers held three hours of talks on police brutality, homophobia and the need for an independent judiciary in the eastern city before the Group B match.

Government officials are already reeling from bad publicity over Tymoshenko’s case and allegations of racism in the buildup to the tournament, the biggest sporting event in eastern Europe since the collapse of communism.

On the pitch, Denmark’s gritty win revived memories of its unlikely triumph at the finals in 1992, when it arrived as a rank outsider but went on to lift the trophy in Sweden.

It also served as a warning to the rest of the so-called favorites and backed up Italy goalkeeper Gianluigi Buffon’s observation that the “best don’t always” win as he prepared for his side’s opening match against Spain on Sunday.

“I’m happy and proud. I think it was a fantastic performance; we dared to play football against this Dutch team,” Denmark coach Morten Olsen told reporters inside the stadium which, circled by blue metal girders, resembles a huge insect.

Netherlands had won 23 of their previous 25 competitive matches, but chose the worst possible time to falter.

By contrast, Germany was iron-willed, gradually grinding down a Portuguese side who came close to breaking the deadlock when Pepe curled a shot against the woodwork in the first half.