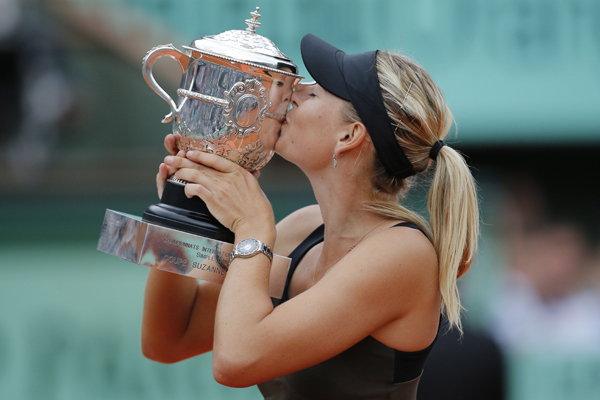 Maria Sharapova of Russia holds the trophy after winning the women’s final match against Sara Errani of Italy at the French Open in Roland Garros stadium in Paris, Saturday. Sharapova won in two sets 6-3, 6-2. [AP/YONHAP]


PARIS - Sidelined in 2008 by a right shoulder that needed surgery, putting her tennis future suddenly in doubt, Maria Sharapova decided to use the free time to study a new language, the one spoken at the only Grand Slam tournament she had yet to win.

‘’I found a French school close to my house,’’ she recalled, ‘’and I did private lessons every single day for three months.’’

Sharapova cut short those classes when it was time to begin the slow, painful rehab process and get her shoulder back in shape. About 3 1/2 years later, on Saturday at Roland Garros, Sharapova put all of that hard work to good use on the most important clay court there is - and even trotted out a little French during the victory speech she often wondered if she’d ever get a chance to deliver.

Whipping big serves with that rebuilt shoulder, putting forehands and backhands right on the lines, and even moving well on the red surface she once worried made her look like a ‘’cow on ice,’’ Sharapova beat surprise finalist Sara Errani of Italy 6-3, 6-2 to win her first French Open title and become the 10th woman with a career Grand Slam.

‘’It’s a wonderful moment in my career,’’ the 25-year-old Sharapova told the crowd in French, before switching to English to add: ‘’I’m really speechless. It’s been such a journey for me to get to this stage.’’

So much came so easily for Sharapova at the start: Wimbledon champion at age 17; No. 1 in the rankings at 18; U.S. Open champion at 19; Australian Open champion at 20. But a shoulder operation in October 2008 made everything tougher. She didn’t play singles from August 2008 until the following May, when her ranking fell to 126th.

‘’It wasn’t getting better as soon as everyone thought it would,’’ she said about her shoulder. ‘’That was the frustrating thing, because it was like, ‘When is this going to end?’’’

It took until her 10th post-surgery Grand Slam tournament for Sharapova to get back to a major final, at Wimbledon last July, but she lost. She also reached the Australian Open final this January, but lost again.

Really, though, there’s something apropos about Sharapova’s fourth career Grand Slam title - and first since her shoulder was fixed - coming in Paris, rounding out the quartet at a spot that always seemed to present the most difficulties. Her powerful shots lose some sting on clay and the footing can be tricky.

A global celebrity with millions of dollars in endorsement deals, Sharapova put herself through the grind required to get back to the top of her sport - and to get better than ever on red clay.

She’s unbeaten in 16 matches on it this season, including titles at Stuttgart and Rome.

‘’I could have said, ‘I don’t need this. I have money; I have fame; I have victories; I have Grand Slams.’ But when your love for something is bigger than all those things, you continue to keep getting up in the morning when it’s freezing outside, when you know that it can be the most difficult day, when nothing is working, when you feel like the belief sometimes isn’t there from the outside world, and you seem so small,’’ said Sharapova, who will return to No. 1 for the first time in four years in Monday’s WTA rankings.

‘’But you can achieve great things when you don’t listen to all those things.’’