Retailers rush to respond to slump in sales

Retailers rush to respond to slump in sales 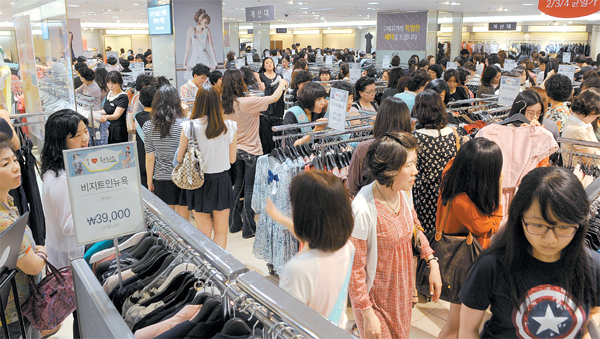 Shoppers peruse through one-piece dresses at Lotte Department Store’s Sogong headquarters on May 25. Clothing by some 100 brands were on sale for a limited time, the largest number participating in a single event in history, the retailer said. Major department stores are resorting to unprecedented sales in order to clear out inventory and boost sales as a lack of consumer confidence deals a blow to on-year growth. [YONHAP]


Major department stores, which were relatively unscathed in the aftermath of the 2008 financial crisis with double-digit growth in monthly sales during 2009, are no longer immune to the fall in consumer confidence.

According to the Ministry of Knowledge Economy, the three largest retailers ? Lotte, Hyundai and Shinseage ? saw a 3.4 percent contraction in on-year sales in April. In the same month of 2011, the Big Three retailers saw an on-year growth of 15.1 percent.

In order to weather the drop, department stores have begun selling high-end branded products for as low as half price, with some even resorting to the sale of used products to squeeze out extra profits.

On the morning of June 3, shoppers flocked to the rooftop terrace of Hyundai Department Store’s Apgujeong headquarters in southeastern Seoul, where the retailer sold used clothing items for as low as 3,000 won ($2.60).

The so-called Green Market was an event that helped raise money for children with acute myeloid leukemia, and customers were eager to take advantage of thrift-shop prices at one of Seoul’s most luxurious shopping centers.

“I frequently stop by department stores these days because they do a lot more bargain sale events than ever before,” said Moon Min-hee, 38. “I understand [the Green Market] was an event for a good cause, but I didn’t expect to see a department store selling used goods in this affluent town.” 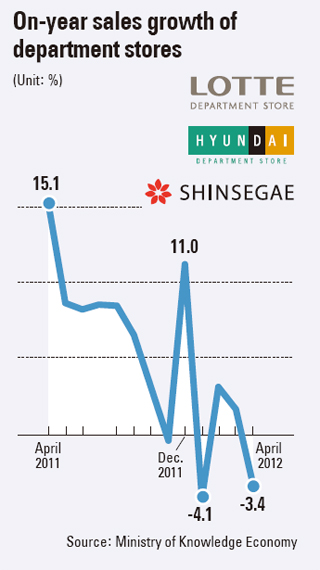 Lotte Department Store’s Sogong headquarters in central Seoul kicked off a major sale for one-piece dresses from 100 brands in May, drawing in packed crowds looking for a bargain just minutes after the retailer opened.

Nearly half of the one-piece items were marked between 20,000 and 40,000 won. A sales clerk at the store said her company had no other option but to throw low-priced events to clean out inventory.

Shinsegae Department Store is now selling winter clothing items for as much as 80 percent off until Thursday after poor seasonal sales. Padding coats are priced from 50,000 won to 100,000 won.

“Departments stores are struggling to clean out a record inventory piled up in storage,” an official at a department store said. “Sales of spring clothing was extremely poor due to the unusually cold and hot weather.”

Market observers said whether or not the retailers’ move to cut prices will help restore sales growth is uncertain. The average customer purchase has dropped to 77,000 won, the lowest figure this year.

In April 2011, on-year growth in the average customer purchase was 10 percent, but the figure went down to a minus 2 percent this April.

On-year growth of the sale of luxury goods, which have long been the department stores’ cash cows by posting double-digit growth since 2009, declined to one digit this year and dropped to minus 6 percent in April.

“But all these efforts don’t really pay off as we get to collect only a few billions of won.”