Samsung’s Galaxy S3 has plenty of bang for buck

Samsung’s Galaxy S3 has plenty of bang for buck 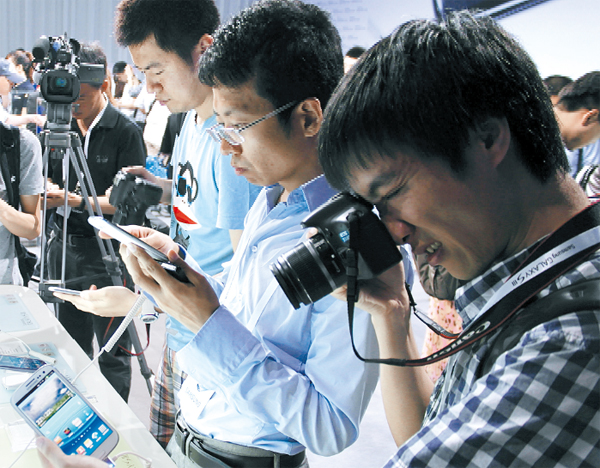 
HONG KONG - The latest version of Samsung Electronics’ Galaxy S series has proved to be a worthy competitor to the rival iPhone and is likely to boost Samsung’s quarterly earnings, analysts said.

Picking up where its predecessors left off, the Galaxy S3 provides a better “touch” experience, making its finger-driven interface more natural. The user can easily and smoothly flip through the screens on the Galaxy S3, with the speed equivalent to that of the iPhone.

Despite the superiority in hardware, Samsung smartphones had suffered from Google’s Android system.

In the Galaxy S3, however, Samsung started to further explore its own software system, going beyond the boundaries set by Android.

Through the picture-in-picture function, users can play video and run other activities or applications simultaneously and smoothly. For example, users can reply to text messages, check their e-mails and browse the Web without closing or restarting videos.

With the “direct call” feature, phone users who were reading the call history and contact information before sending text messages can simply lift the phone to their ear and automatically dial the recipient’s number without pressing any buttons.

Samsung also introduced the “smart stay,” which uses the front camera to detect the user’s eyes and keeps the mobile phone screen light on. It could be useful when the user is reading an e-book or browsing the web with the Galaxy S3.

Many market watchers said software changes in the Galaxy S3 mark the greatest improvement over previous Galaxy S smartphones, expecting the newest phone will continue the huge success of the
Galaxy Note smartphone-tablet hybrid and the Galaxy S2 phone, which contributed to the robust profits in the first quarter.

UBS estimated 5-6 million units of the Galaxy S3 will be shipped during the second quarter, moving to 10-12 million per quarter in the third and fourth quarters this year.

An even more optimistic view was given by BNP Paribas, which expected the Galaxy S3 shipment to reach 15 million units in the third quarter, which is double the average sales volume of the Galaxy S2.

“The Galaxy S3 is being rolled out to all operators supporting all communication standards, including TD-SCDMA and LTE. And given its large volume, Android application developers are focusing their resources on the Galaxy as the reference phone,” said Peter Yu, an analyst at BNP Paribas.

In the first quarter, Samsung Electronics, the world’s largest maker of computer memory chips, saw its earnings surge 81.3 percent from a year earlier, fueled by strong sales of its Galaxy series smartphones.

Net profit amounted to 5.04 trillion won ($4.44 billion) in the January-March period, compared with a net income of 2.78 trillion won the previous year, the company said.
Yonhap