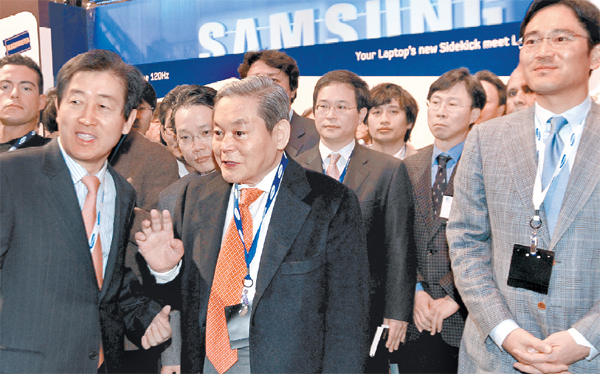 In this file photo from January of 2010, Choi Gee-sung, Samsung Group’s new head of the corporate strategy office, left, talks with Chairman Lee Kun-hee and his son Jae-yong at the Consumer Electronics Show in Las Vegas. [YONHAP]


On his first day as head of the corporate strategy office at Samsung Group last Friday morning, Choi Gee-sung took his employee card out of his pocket and placed it on the gate scanner that tens of thousands of other Samsung workers use to get into the headquarters in Seocho, southern Seoul.

The leader of the corporate strategy office ? the control tower of the nation’s largest conglomerate ? and Chairman Lee Kun-hee have traditionally passed through the executive glass door located right next to the security gate. Samsung’s other top officials also enjoy the privilege of blowing past the security gate as guards disable the system with remote controls upon their arrival.

Yet Choi, who was appointed on Thursday to the second-highest position at Samsung, chose to go through the same entrance procedures as the average employee, symbolizing his willingness to break away from the strict top-down mentality and spearhead wide-scale reform, the key task he has been entrusted to embark on.

“In this crucial period when the group faces the impending task of fostering new growth engines after semiconductors, TVs and handsets, hiring of Vice Chairman Choi, who has a global management mindset, swift judgment and strong hold on power and drive, is the ace in the hole,” said Samsung in a statement on Thursday.

Although Samsung Electronics posted record-high operating profits of 5.85 trillion won ($5 billion) in the first quarter, 73 percent of it came from its IT and mobile division, meaning smartphones were the biggest contributor. But analysts point out that Samsung has yet to come up with a next-generation product that will receive the baton from smartphones to sustain its leadership in the tech industry.

June 7 marked the 19-year anniversary of the day Chairman Lee ordered the entire staff to “change everything except for wives and children,” pronouncing thorough reform. He stressed quality over quantity and the shift was dubbed “new management” during a visit to Frankfurt.

“While Chairman Lee pointed out the ‘crisis of quality’ in 1993, he is now paying attention to the ‘crisis of the market,’” said an official with Samsung’s Corporate Strategy Office. Right after the chairman returned from a business trip around Europe in May, the official said, he repeatedly stressed the importance of heightening a sense of crisis that stems from the ongoing European financial crisis.

Another official from the strategy office said Lee seems to have been enlightened by the fact that once stronger Japanese rivals such as Sony and Sharp have weakened to a level that is now incomparable to Samsung.

“Lee also seems intent on ‘lashing’ the organization that is on the verge of turning overly arrogant with leadership in the industry,” the official added.

Before its renaming as the corporate strategy office in November of 2010, the core body of Samsung has undergone several name changes over the past decades from the chairman’s secretarial office to the corporate restructuring headquarters.

Irrespective of the nominal reform, its key role has been overseeing overall corporate affairs across 81 affiliates of Samsung and establishing their mild- and long-term business strategies. The head of the office has also been the closest aide to the chairman and his families.

Choi, 61, who has worked for Samsung for three decades, is known as a long-time tutor and mentor of Jae-yong, the chairman’s only son and heir-apparent. The 43-year-old has served as chief operating officer of Samsung Electronics in January of 2009 and attention has been given to when and how he will take over the leadership in the family-owned group.