All assumed dead in helicopter crash

All assumed dead in helicopter crash 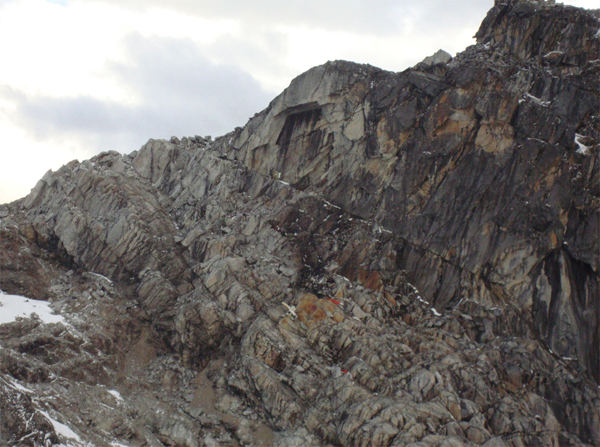 The wreck of a helicopter carrying 14 people, including eight Koreans, sits on a mountain in the Andes at 4,950 meters (16,240 feet) above sea level in southern Peru in this photo taken by the Peruvian government’s search and rescue team on Saturday. All of the passengers and crew are assumed dead, Seoul’s Ministry of Foreign Affairs and Trade said. [NEWSIS]


The wreck of a helicopter carrying 14 people, including eight Koreans that went missing in Peru last Wednesday, was found, according to the Ministry of Foreign Affairs and Trade yesterday, and everyone aboard was assumed dead.
The Peruvian government’s aerial search and rescue team, commissioned jointly by the police and the military, located the helicopter high on a snow-capped mountain around four kilometers (2.5 miles) away from the village of Coline in the southeastern province of Puno on Saturday, the ministry said, based on what Peruvian Interior Minister Wilber Calle told the Korean Embassy in Lima.
The helicopter appeared to have smashed into a cliff and broken in two pieces, the ministry said.

A Peruvian ground search team, involving dozens of police officers and civilians, also saw the wreckage on Saturday from about one kilometer away, but because of rough terrestrial conditions and bad weather, the operation was also postponed until Sunday, the ministry said.
The helicopter went missing on Wednesday, and its last radio contact was made one hour after it took off from the town of Masuko in Puno. The group was returning to the northwestern town of Cusco in the same province after visiting a potential hydropower plant site near Masuko. The eight Koreans on board were employees of four major Korean firms.