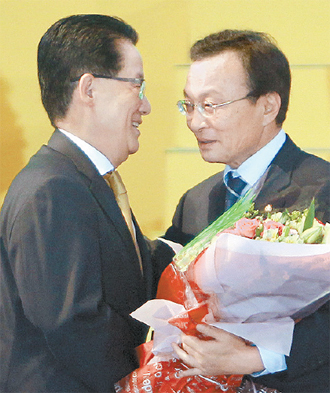 Representative Lee Hae-chan, a key loyalist of the late President Roh Moo-hyun, was elected Saturday the new chairman of the Democratic United Party to oversee the largest opposition party’s crucial campaign for the December presidential election.

Lee managed to clinch a come-from-behind victory against rival Kim Han-gill due to heavy support by mobile phone votes.
The final round of voting by party delegates from the capital region took place at the DUP national convention on Saturday in Ilsan, Gyeonggi.
Overall, Lee won a total of 70,671 votes (24.3 percent), while Kim lost narrowly with 23.8 percent. Lee’s 0.5-percentage-point boost came from mobile phone votes by the general public, which took place on Tuesday and Wednesday. Kim defeated Lee in the voting among DUP delegates.

The chairmanship race was seen as a preview of the party’s presidential primary. Lee was backed by presidential hopeful Moon Jae-in, a key Roh loyalist, while Kim was supported by other candidates such as South Gyeongsang Gov. Kim Doo-kwan and former party Chairman Sohn Hak-kyu.
“I will fight staunchly against the McCarthyism of Park Geun-hye’s Saenuri Party,” Lee said in his acceptance speech. “I am beseeching the Saenuri Party: The economy is in a crisis, and we must not have an ideological war amidst this hardship. Please stop the McCarthyist accusations and the claiming of blind love for North Korea by the opposition. I ask Park to make the presidential election a contest between policies that affect people’s livelihoods.”
Lee vowed to deter the Saenuri Party from winning the presidential election, declaring that “economic democracy, universal welfare and peace on the Korean Peninsula will be the cornerstones of our presidential campaign.”

When the DUP kicked off its leadership contest in May, expectations were high that Lee would easily win the chairmanship. Before the election began, the two largest factions inside the DUP had reached a deal on splitting the leadership positions with an aim to heighten the efficiency of the party’s campaign in the presidential election.
According to the plan between the Roh loyalists and Kim Dae-jung loyalists, Lee would serve as chairman while Park Jie-won, a leader of the Kim faction, would be floor leader.
As planned, Park was elected floor leader on May 4 with the backing of the Roh faction, but Lee’s race ran into trouble as the secret power split started to fall apart.
When the nationwide primaries of the delegates ended last week, Lee’s chance to clinch the chairmanship appeared to be grim as Kim managed to win 210 more votes than Lee, scoring victories in eight out of 10 elections. He also won the final round of the delegate voting in the capital region.

But at Saturday’s convention, the outcome of the mobile phone votes from last week was announced, and Lee won after all.
By electing Lee chairman, the largest opposition party is armed with a powerful leadership ahead of the December election. The lineup of Lee as chairman and Park as floor leader is expected to grease the party’s preparation to fight against the Saenuri Party’s presidential front-runner Park Geun-hye.
During the race, conservatives questioned Lee’s attitude toward Pyongyang after he said South Korea shouldn’t interfere with human rights in the North. He was also criticized for defending Lim Soo-kyung, a former student activist-turned-lawmaker, who caused a furor two weeks ago by calling a 29-year-old defector from North Korea a “traitor.”
Lee characterized the attacks against him and Lim a “new McCarthyism” in Korea. His spokesman, Oh Jong-sik, said the decisive leadership of Lee was what the people wanted from a stronger opposition party.

With Lee’s victory, the presidential ambition of Moon, a former chief of staff of the Roh Blue House, will gain momentum. The party chairman has strong influence over the DUP presidential primary.
“Moon managed to escape the worst situation,” said a first-term lawmaker of the DUP. “The party leadership is now restructured, and it also gave him an opportunity to turn around its falling popularity.”
“Whether Moon intended it or not, the media will see Lee’s victory as a confirmation of Moon’s influence over the party,” a DUP official said.
And yet, Lee’s narrow victory against Kim hints that Moon will also face similarly tough competition in the presidential primary.
Kim Doo-kwan, the South Gyeongsang governor nicknamed “Little Roh Moo-hyun,” has enjoyed unusually strong popularity in the Gyeongsang region, a traditional stronghold of the Saenuri Party. Some associates of Roh began supporting Kim because Moon’s campaign was already completed and they were unable to join in.
Other DUP politicians said Kim has risen from being a regional politician to a nationwide celebrity by supporting Lee’s rival. “Although Lee won the chairmanship, a survey of presidential candidates in my district showed that Kim was ranked the highest,” a DUP lawmaker in Seoul said.