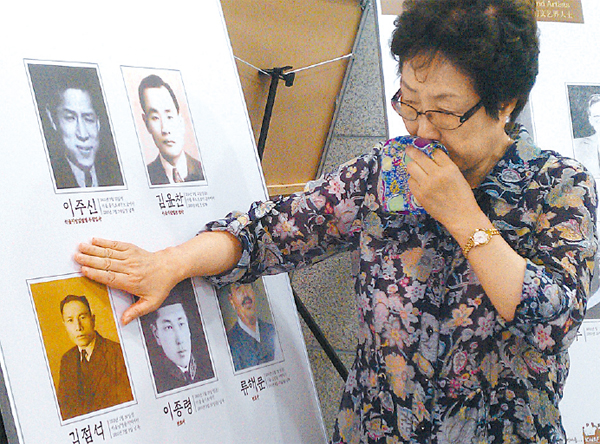 Kim Ji-hye, 70, looks at a photo of her father at the exhibition of photos of 88 South Koreans abducted to the North during the Korean War (1950-53) at the Odu Mountain Unification Observatory in Paju, Gyeonggi. By No Jin-ho


On a recent afternoon, Kim Ji-hye, 70, wiped tears with a handkerchief while staring into North Korea from the Odu Mountain Unification Observatory in Paju, Gyeonggi.
“It’s even more heartbreaking to see a photo of my father from here, a place from which I can see the North,” Kim said.

From last Tuesday, the observatory has been displaying photos of 88 South Koreans from different circles ? industry, culture and academia ? who were abducted to the North during the Korean War.
There are also photos that depict the history of the South’s repatriation movement. There have been war-related photo exhibitions at the unification observatory in the past, but this is the first time that abductees have been displayed.
Kim’s father was taken to the North following the outbreak of the Korean War in 1950. Kim was a lawyer and unable to flee Seoul because he had to look after his sick wife. He was kidnapped by North Korean soldiers and taken North on July 8, 1950.
Kim said her father had recently returned to the family home after staying with a cousin for a while. A man with a red armband ? representing Communism ? knocked on the family’s door and said, “You only have to answer a few questions and everything will be fine. Where have you been?”
The man started to take her father away. He looked back at Kim, who was eight years old, and said, “I will be right back.”
She never saw her father again.

“I feel so bad for him,” Kim said with a sigh. “How would he have lived in the dark, dark North?”
According to Resolution 376 calling for the repatriation of POWs, MIAs and abductees in North Korea that was passed by the Untied States Congress last December, 100,000 South Korean civilians were abducted during the Korean War. North Korea, however, has always denied the kidnappings.
The Korean War Abductees’ Family Union, which has been fighting for the repatriation of the missing South Koreans, decided to open a photo exhibition at the observatory, where visitors are able to have a glimpse of the North.
“Although the sound of artillery fire has stopped, families of abducted South Korean civilians still consider every day another day of the Korean War,” said Lee Mi-il, who founded the organization in 2000.

According to the Odu Mountain Unification Observatory, around 2,000 people visit the site every day, even on weekdays, because the observatory is located close to Seoul. As of yesterday, more than 10,000 visitors have seen the exhibition. Around 30 percent were estimated to be foreigners.
“I didn’t know there were so many South Korean civilians who were abducted to the North,” said Tomoko Tan, a 60-year-old visitor from Fukuoka, Japan. On Wednesday, she visited the exhibit with eight friends.
“Why isn’t the South Korean government demanding the North repatriate the abductees like the Japanese government is?” she asked.