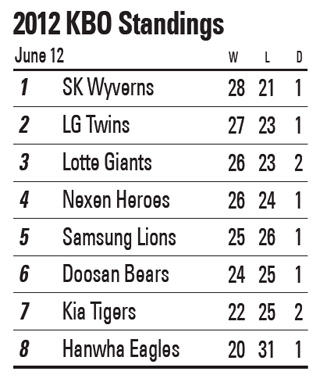 Last week on Memorial Day, the Korea Baseball Organization surpassed three million in attendance earlier than ever before, in just 190 games. The previous record of 227 games was set last year.

Six teams had a rest on Friday as heavy rain washed away three games; last year’s finalists, the SK Wyverns and Samsung Lions, were able to play one game in Incheon.

The LG Twins, who have not made the playoffs in nine years, last week faced their Seoul rivals, the Nexen Heroes and Doosan Bears, and managed to move into second place in the standings.

The Twins, led by rookie manager Kim Ki-tae, had beaten the Heroes only twice in eight games this season before meeting them Tuesday, but took the three-game series 2-1.

The Twins also won two of three from the Bears, their Jamsil Baseball Stadium neighbors. The Twins went 7-12 against the Bears last season, but this year, they are 7-1.

The Twins’ southpaw ace, Benjamin Jukich, won against the Heroes and Bears. The 30-year-old leads the league in wins (8) and ERA (2.34).

The Twins face a tough challenge this week as they host the first-place Wyverns tonight and the Kia Tigers on Friday. The Gwangju-based Tigers are in seventh place, but they are 5-1 against the Twins this year.

The last-place Hanwha Eagles managed to get their 20th victory of the season.

But this will be a heavy travel week for the Daejeon-based team as they face two of the teams that have dominated them this season on their home turf - the Lions in Daegu tonight and the Wyverns in Incheon on Friday.

The Lions are 6-2 against the Eagles, while the Wyverns are perfect at 6-0.

It will be interesting to watch Eagles’ slugger Kim Tae-kyun, the league leader in batting average (0.415), hits (73) and on-base percentage (0.507), face some of the league’s best pitching.

Another bright spot for the Eagles has been Park Chan-ho, who holds the record for the most wins by an Asian in Major League Baseball.

Park collected his third win of the season on Sunday against the Heroes and will be looking for victory number four this week.