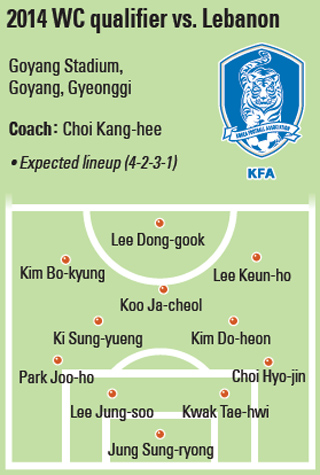 After coming off a 4-1 victory against Qatar over the weekend, the Korea’s national football team will face off against Lebanon in their final round Asian qualifier for the 2014 FIFA World Cup tonight in Goyang, Gyeonggi.

Korea, 35th in FIFA rankings, leads the overall head-to-head record against 143rd-ranked Lebanon with six wins, one draw and one loss. However, that single 2-1 loss remains a painful memory for the Taegeuk Warriors, coming in their third round Asian qualifier in November. Former coach Cho Kwang-rae was fired after that match.

But with new coach Choi Kang-hee taking the helm, the team is looking to avenge last year’s loss with its second-consecutive victory.

Pundits say the key for the national football team is how fast they can recover their energy and adjust to jet lag after traveling back to Korea from Qatar.
The team spent almost two weeks overseas. Before returning to Korea on Saturday afternoon, the team was in Switzerland to play a friendly against Spain on May 30 and then moved to Qatar for their World Cup qualifier last Friday.

But Choi said the team is not worried too much about the situation, expecting that the Lebanese players are in a similar condition. The Middle East nation played Qatar on Monday - suffering a 1-0 loss - before playing Uzbekistan to a 1-1 stalemate last Friday.

“We’re worried about jet lag, but the point is to recover our energy quickly,” Choi said on Saturday upon his arrival at Incheon International Airport. “Since we won the difficult game, I think we’re on pace mentally and will recover our stamina fast.”

Although the team beat Qatar, some have insisted the defense should be more organized since there was a large number of lapses. Lebanon, playing its first away match, is expected to come up with a quick counterattack and follow with tight defense, but Choi said the team is prepared for those tactics.

“Our players have played a lot of matches with teams that have similar styles,” Choi said. “What’s important for players is that they should not lose control of the game tempo during the match.”

The starting lineup against Lebanon is reported to be no different than the team that took the pitch in the Qatar match. But Ulsan Hyundai FC’s striker Kim Shin-wook will be absent due to a yellow card accumulation. The 196-centimeter (six-foot-five) tall player had impressive performance against Qatar in the second half as a substitute, but since he is gone, Choi said he will adjust attacking tactics.

“We have other good players who can cover up Kim’s absence,” Choi said. “We should be offensive-minded, but overall balance and coordination of the team is more important.”

Choi is expected utilize both sides of wings as much as possible as two wingers -Lee Keun-ho and Kim Bo-kyung - shined during the match against Qatar.
Lee Keun-ho successfully filled the void left by Bolton Wanderers’ winger Lee Chung-yong, who is absent from the roster because of a knee injury, and stepped up as a “killer” for the Middle East nations.

In fact, 10 of his 13 international goals have come against teams from the Middle East.

Kim Bo-kyung, the 23-year-old who plays for Cerezo Osaka, also turned in a good performance against Qatar. He assisted on the team’s first two goals with his left foot as Lee and Kwak Tae-hwi made headers to score.

“Kim is a player who has lot of good characteristics,” Choi said. “I expect him to be more confident after the Qatar match and to play well.”