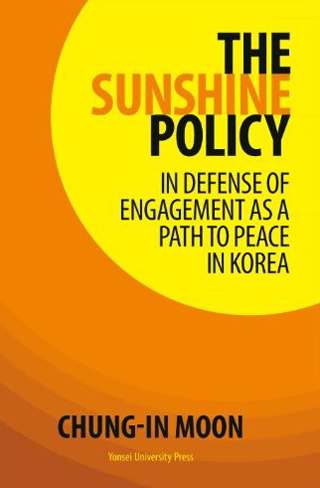 
There are many publications about Kim Dae-jung's "sunshine policy."which garnered international attention.

He spearheaded the unprecedented efforts to engage North Korea instead of isolating it as part of the “axis of evil” (a page from the book of former U.S. President George W. Bush).

But there is one reason that “The Sunshine Policy: In Defense of Engagement as a Path to Peace in Korea” by Chung-in Moon stands out among them: the timing of the release.

North Koreans recently ushered in a new regime under Kim Jong-un after the death of his father Kim Jong-il in December of last year. Scholars are currently debating the significant of the regime change, including whether the young Kim will merely carry on his late father's belligerent policies or do things his own way.

Also, both South Korea and its closest ally, the United States, will hold presidential elections this year. Though the current Lee Myung-bak administration is most certainly not a fan of the Sunshine Policy, it's not certain how the next administration will approach our neighbors to the north.

This book says the Lee Myung-bak administration was wrong to abandon the engagement policy shaped by the Kim Dae-jung and Roh Moo-hyun administrations,
saying that "There is no other realistic option but to engage with Pyongyang... South Korea must treat the North as a normal state, not a country in exigent circumstances that require military intervention and emergency stabilization."

Moon is one of the architects of the Sunshine Policy, having served at the Ministry of Foreign affairs and Trade, and so his perspective is likely to be in great demand in the coming months.