Will Korea’s property market go up in smoke like Japan’s?

Will Korea’s property market go up in smoke like Japan’s?

A 65-year-old man identified by his surname Kim purchased a large apartment in Gimpo, Gyeonggi, for 400 million won ($339,270) in 2005, when the country’s real estate market was booming. Its price quickly soared to 450 million won, but the situation took a turn for the worse after the global financial crisis in 2008. Upon his retirement, Kim desperately needed money and put his apartment up for sale. However, his home only fetched 280 million won. Taking into account inflation and the interest he paid on his mortgage, he suffered a considerable loss.

With apartment prices continuously declining in the Seoul metropolitan area, there is an ongoing controversy over whether Korea is going to see its real estate bubble burst as Japan did over a decade ago.

Korea is facing a number of challenges due to its slow-moving economy and graying population ? both of which are set to be aggravated by the imminent retirement of legions of so-called baby boomers ? and the country seems to be walking in Japan’s footsteps.

Moreover, a growing economic disparity between the country’s haves and have-nots, coupled with the swelling number of irregular workers, is expected to further tighten the screws.

According to a book titled “How the Real Estate Bubble Will Burst in 2015” by Han Mun-do, a former professor at Dong-eui University, the situation will become more severe as many apartments and detached homes are scheduled to be demolished to create space for new apartments.

Han said the market could enjoy some brief respite this year or next, but that the real estate bubble would burst in 2015.

“Housing and real estate prices will decline much faster after 2013,” he wrote. “Local construction firms can supply 750,000 homes a year, but the optimal supply is just 300,000. This will inevitably lead to games of chicken between construction firms to see who pulls out first [due to oversupply].”

One problem is the declining population of people aged 35 to 54, as this age bracket traditionally buys the lion’s share of homes. Statistics Korea and the Bank of Korea said their numbers will start to dwindle this year but later drop by an annual rate of hundreds of thousands every year, further drying up demand.

The number of unsold new apartments in the country has risen rapidly since 2007 to hit 29,000 units as of January. Midsize to large apartments account for 70 percent of the unsold units.

In the past, those in their late 30s and 40s tended to switch to larger apartments as their children grew older and their income levels rose. But more people are now making do with smaller abodes due to a decline in the number of households with two or more children.

According to statistics released by the Seoul City government, four-member households made up 45 percent of the city in 2000 but just 30.9 percent in 2010. Industry observers believe the percentage will continue to slide. 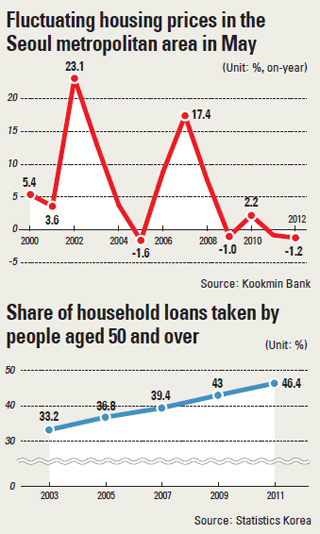 If Japan’s experience is anything to go by, Korea’s baby boomers born between 1953 and 1963 are likely to sell their apartments en masse as soon they reach the age of retirement. Real estate analysts are concerned that if this happens, housing prices will decline further.

As this group has already started retiring in growing numbers in the last few years, a hot topic at the moment is how they will support themselves when their income sources dry up. In lieu of a fixed monthly wage, many are expected to sell their assets including property to stay solvent.

According to Statistics Korea, 82.6 percent of assets held by those aged 55 to 65 are held in the form of real estate. For those over 65, the percentage rises to 86.2 percent.

Many baby boomers have moved from Seoul to satellite cities in neighboring Gyeonggi in the last two decades in order to snap up larger homes, amassing huge mortgages along the way.

According to a stability report by the Bank of Korea, those in their 50s have seen their debts expand rapidly, creating something of a ticking time bomb for the real estate market.

“If they are forced to sell their real estate due to the growing burden of mortgage repayments, the same bubble that burst in Japan some 20 years ago is likely to collapse in Korea,” Han wrote.

According to the report, people in their 50s and over held 46.4 percent of the nation’s total household debt of 912.9 trillion won last year, compared to just 33.2 percent in 2003.

People in their 50s and older took out 53.5 percent of all the mortgages issued during that period for expensive homes, but the gambit would have failed for those who need to cash out now as real estate prices have dropped.

Many older people have dug themselves into a deeper hole by borrowing more money to start a business after they retire by using their real estate as collateral.

Self-employed people made up 53.9 percent of those aged 50 or older in 2011, up from 47.1 percent in 2008.
Should their businesses fail, this would create more instability in the housing market.

In Japan, housing prices have been sliding steadily since the early 1990s as people in their 50s and 60s sell off whatever disposable assets they have to stay afloat.

The same worrying trend could strike Korea as real estate accounts for at least four-fifths of the assets held by elderly people, a rate considerably higher than those seen in Japan and the United States.

Ultimately, many will buckle to the financial pressure and liquidate their assets. This is indicated by the growing number of 50-somethings who have applied for debt-workout programs recently, with the number climbing from 22.2 percent in 2010 to 24.3 percent last year.

In reality, however, Korea and Japan are not peas in a pod but two vibrant Asian neighbors with varying economic fundamentals, meaning that Korea’s fate is not necessarily predestined to echo that of Japan’s.

The differences in the way the two handle their economic affairs is especially pronounced when it comes to mortgages.

In Japan, as in the United States, banks lend up to 100 percent of a home’s value, whereas in Korea, they only provide 60 to 70 percent due to rules laid down by the financial watchdog. Local borrowers are further restricted by stringent debt-to-income regulations.

Some critics claim the practice of jeonse, where the lessee foregoes monthly rent payments by giving the landlord a lump sum deposit equivalent to up to half of the house’s value, safeguards against a bubble.

This means Koreans are exposed to lower levels of debt than their Japanese or U.S. counterparts.

“The giving of large amounts of ‘key money’ explains why Korea has not had to deal with a burst bubble like the U.S. and Japan,” said Kim Sun-dok, head of a think tank called Construction Industry Strategy Research.

“Of course, there are certain similarities, as Korea is experiencing a graying population and weakening industrial competitiveness as it develops,” Kim said. “But Korea’s real estate market is fundamentally different from that of Japan and the U.S.”
Japan’s real estate bubble was mostly caused by the spiraling cost of office buildings, but in Korea, apartments pose the biggest risk, he said.

“In Korea, buyers need to wait a couple of years until apartments are finished because they are normally built after they have been purchased. So when there is a shortage, prices shoot up quickly. But when they fall, they fall slowly,” he added.

This insulated owners against huge losses, he argued, citing how apartment prices fell just 13 percent in Korea in 1998 at the height of Asian financial crisis, but plummeted more than 25 percent in Britain and the U.S. when their respective bubbles burst.

Song In-ho, a senior researcher at the Korea Development Institute, agreed that the bottom is unlikely to fall out of the domestic market.

“Housing prices in the Seoul metropolitan area have already hit bottom,” Song said. “Furthermore, there is still a supply shortage compared to other developed countries. As single households continue to grow, we will need more houses.”